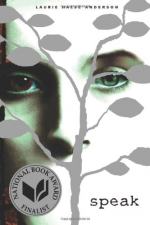 Laurie Halse Anderson
This Study Guide consists of approximately 53 pages of chapter summaries, quotes, character analysis, themes, and more - everything you need to sharpen your knowledge of Speak.

It's April. Melinda has passed many of her tests. She notices that Andy Beast, as she now calls IT, has abandoned the Marthas and is hanging around the International Club girls. That includes Melinda's former friend Rachel.

The last day of Spring Break, Melinda visits the mall and sees Ivy, who's working on a sketch to help with her project for art class. Ivy invites Melinda to take a look and the two former friends begin an easy, comfortable conversation about their projects.

Andy Beast went to the movies with Rachel and some of her exchange student friends from the International Club. Now, the girls walk through the halls with him and gaze at him adoringly. Even though Rachel has rejected her, Melinda can't help feeling worried about her with Andy. Something in her wants...

(read more from the Fourth Marking Period (through page 162) Summary)

More summaries and resources for teaching or studying Speak.