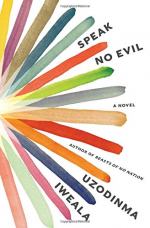 Iweala, Uzodinma
This Study Guide consists of approximately 71 pages of chapter summaries, quotes, character analysis, themes, and more - everything you need to sharpen your knowledge of Speak No Evil.

This detailed literature summary also contains Quotes and a Free Quiz on Speak No Evil by Iweala, Uzodinma .

The following version of this book was used to create this Study Guide: Iweala, Uzodinma. Speak No Evil. Harper, 2018. First edition.

In Part 1 of the novel, Gwamniru (Niru) Ikemadu, the first-person narrator and son of affluent Nigerian immigrants to America, goes home with Meredith, the daughter of affluent white parents, after their elite private school in Washington, DC, closes because of a snow storm. Meredith's attempt to kiss Niru ends with Niru coming out to Meredith as gay. Seeking to help her friend and track teammate explore his identity, Meredith installs dating apps on Niru's smartphone; neither Meredith nor Niru remember to turn off the notifications from these apps. When Obi, Niru's conservative and Christian father, discovers the phone and sees requests for dates from men, he brutally attacks Niru and is prevented from killing him only by the intervention of Ify, Niru's mother.

In the aftermath of the attack, Obi and Ify—believing that being gay is a spiritual illness that can be cured with prayer—force Niru to go to Nigeria to be cured by the local minister in the village where Obi grew up. The prayer session with the local minister proves traumatic and sends Niru into a spiral of depression when he returns home. Niru also cuts off all contact with Meredith because he believes that she is a bad moral influence on him. At his parents' insistence, Niru attends weekly spiritual counseling sessions that only serve to make him engage in thoughts and behaviors that objectify women rather than making him straight, like his parents hope. At his lowest point, Niru gets into a fight with Meredith, whom he manhandles, curses, and ridicules because she failed to get into Harvard like him. Afterward, Niru gets so drunk that he nearly blacks out and has to be rescued by a concerned passerby.

This passerby turns out to be Damien, a handsome, 18-year-old dancer who is a student at Howard University. Unable to deny who he is, Niru eventually reunites with Damien and begins building a relationship with him. Niru continues to live life as a closeted gay man, however, so he refuses to allow Damien to call him and sneaks off for dates with Damien during the school day. Niru's relationship with Damien ends when Damien realizes that Niru has internalized the anti-gay judgments of his parents and church.

As the school year draws to a close, Niru and Meredith attempt to re-establish their friendship, and Niru runs his last race, beating his best personal time and earning a rare expression of pride from his father. After the race, Obi offers to allow Niru to drive his pride and joy--a very expensive Range Rover--home. While on the George Washington Parkway, Niru misses a call from Damien and gets so exasperated with his father's controlling ways that Niru jumps out of the car and runs away.

Part 2 of the novel picks up the story six years later and is narrated by Meredith, who is returning from her home in New York to help her parents move to Cambridge, Massachusetts, where her father has a new teaching position. As Meredith packs up her room, she discovers a windbreaker Niru wore the last time she saw him.

Meredith and Niru met at Meredith's house the day that Niru ran from his father six years prior. The original plan for the night had been to participate in Riverrun, a senior rite of passage that involved drinking and running. Niru convinced Meredith to go with him to a bar on Fourteenth Street near where Damien lived. Niru hoped Damien would meet him there. Meredith, eager to re-establish her friendship with Niru, went along with the plan. When they arrived at the bar, Niru was unable to get a cellphone signal inside, so he left Meredith alone. Damien refused to come to the bar.

When Niru came back to the bar to extract Meredith, who was in the company of a pushy college student who bought her several drinks, Meredith was so hurt and angry by the way that Niru took her for granted that she refused to leave. Niru left the bar to avoid getting into a fight with the hostile white crowd. Meredith was afraid to be in the bar without Niru and angry at Niru for leaving her there, so she followed Niru as he walked into an alley. After Meredith pushed Niru down from behind, Niru slammed her into a wall and told her to calm down. The police showed up and told Niru to step away from Meredith. Niru did step away, but when he reached for his ringing phone, the police shot and killed him.

In the aftermath of Niru's death, Meredith and her family decided to remain silent about the circumstances of the shooting and allowed people to think that Meredith was a rape victim who was saved from Niru by the police's intervention. Days after the shooting, Meredith ran to the Ikemadus' house to apologize, but OJ and his family were so upset that she was unable to speak.

Back in the present, Meredith continues to go on runs around the city, including one that takes her near the scene of Niru's death and repeated runs that bring her to the Ikemadus' neglected home. She sees Obi, now an unkempt alcoholic, on one of these runs to the house and even goes into the house to look at the cluttered, neglected bedrooms of the family one day while Obi is gone.

Meredith's runs are interspersed with tense conversations with her parents and difficult memories of the days following Niru's death. At the end of the novel, Meredith runs to the Potomac to throw Niru's windbreaker in it. When the windbreaker refuses to sink, Meredith retrieves it and runs to the Ikemadu house to give the windbreaker directly to Obi. Obi invites Meredith in and asks her to speak to him, which she does for the first time since Niru's death.

More summaries and resources for teaching or studying Speak No Evil.