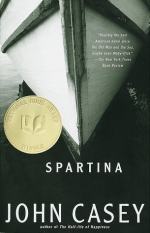 John Casey (novelist)
This Study Guide consists of approximately 72 pages of chapter summaries, quotes, character analysis, themes, and more - everything you need to sharpen your knowledge of Spartina.

This detailed literature summary also contains Topics for Discussion and a Free Quiz on Spartina by John Casey (novelist).

Spartina won the 1989 National Book Award. It is the story of a middle-aged fisherman, who sees his heritage begin to disappear in a world of tourism and big business. He is determined to carry on the tradition of New England fishermen by providing for his family on his own land and in his own boat. As he struggles to support his family and attain money to finish the boat he is building in his back yard, he does some foolish things. His temperament has made it difficult to deal with the people most able to help him, and he feels he must isolate himself from them in order to maintain his independence. When he begins an affair with a lady who shares his interest in maintaining the traditions of the coastal town, she becomes the catalyst he needs to see himself more objectively and to find more creative ways of obtaining the funding he needs. Only when he feels he has obtained his goals does he realize that his life centered on the procurement of his boat, not in the security its completion has brought.

When the story begins, Dick Pierce is a forty-two-year-old fisherman, who has a reputation for having a bad temper and being hard to deal with. His ancestors once owned a great deal of the land where the story takes place, but through some poor business decisions and some acts of fate, all is lost except for the small piece which Dick owns and lives on with his wife and two children. He has broken ties with the bank and the larger employers of the small fishing town where he grew up, and where his piece of land has become surrounded by new tourist cottages. His dream of owning his own boat and making a living in order to carry on the heritage passed on to him by several generations is blocked by his inability to make enough money to finish the boat, while at the same time making a meager living at small-time fishing.

Dick begins to cross the line between honesty and thievery, when he steals clams from the local bird sanctuary. Sometime later, without his knowledge, a friend plants drugs on him that he accidentally smuggles into the country. He doesn't want to take the five hundred dollars offered to him as his share, but it means too much for him to refuse. He goes on to assist in a risky drug smuggling operation before his luck changes, and a lady he begins an affair with finds a way for him to borrow the money he needs.

Soon finding that his affair has resulted in a pregnancy, Dick is torn between continuing the relationship with her and telling his wife everything about what happened. He eventually tells his wife, but it is not until his pregnant girlfriend refuses his sexual advances that he discontinues the relationship.

Dick eventually completes his boat. However, on the day of the launch, he learns that a hurricane is bearing down on the coast in his vicinity. He feels his only option to save his boat is to take it out to sea and to try to ride out the storm. Dick and his boat are both challenged to their limits, and Dick realizes that he, himself, might be the weak link in his survival. He eventually returns to the shore safely with his boat, but he finds that life is not as easy as he anticipated. Part of his trouble is that he misses the adventure and pressure he had known the last several years.

More summaries and resources for teaching or studying Spartina.