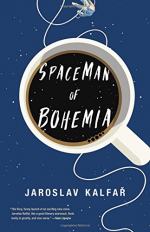 Jaroslav Kalfar
This Study Guide consists of approximately 40 pages of chapter summaries, quotes, character analysis, themes, and more - everything you need to sharpen your knowledge of Spaceman of Bohemia.

This detailed literature summary also contains Quotes and a Free Quiz on Spaceman of Bohemia by Jaroslav Kalfar.

The following version of this book was used to create this study guide: Kalfař, Jaroslav. Spaceman of Bohemia. Little, Brown and Company, 2016.

Jakub Procházka introduces himself while he describes the final moments before he was launched into space. After recalling the intense preparation he underwent in order to become fit for the mission, Jakub reminisces about his childhood. Jakub’s underprivileged upbringing in rural Czechoslovakia was made bearable by his loving grandparents. However, Jakub’s father was a torturer for the Soviet Union. Therefore, after the Velvet Revolution, Jakub’s family faced aggression from embittered, democratically inclined Czech citizens.This forced Jakub and his family to leave their village of Středa for a new chance at life in Prague.

Thirteen weeks into his excursion to outer space, Jakub performed his daily maintenance routines while explaining the nature of his mission. His job was to investigate a mysterious, dark particle cloud called Chopra, a few miles outside of Venus. He spoke to his wife, Lenka, and his mission engineer, Petr, every day. Jakub avoided speaking to his psychiatrist, Dr. Kuřák, because he did not trust Dr. Kuřák’s intentions. Jakub’s relationship with Lenka became strained over time, and Lenka left Jakub because she could not handle the isolation.

While trying to come to terms with the loss of his wife, Jakub noticed an entity wandering around inside his ship. Eventually, Jakub spoke to the entity, and realized that it was an alien spider. He could not tell if it was real or not, but he named it Hanuš, after the creator of the first astronomical clock. The alien caused Jakub to recall the death of his parents. Since his father was a torturer for the Soviet Union, Jakub’s family home was vandalized for years until they were forced to move to Prague. A politician, referred to by Jakub as “Shoe Man”, forced the Procházka family out of their village, so Jakub’s hatred for Shoe Man festered over the years.

As Jakub approached the Chopra cloud, he continued talking to the alien while he performed his routines. Petr arranged for a spy to give Jakub reports about Lenka’s whereabouts and activities. Lenka had moved to a different town, and she had started a new life. When Jakub finally approached Chopra, he entered the cloud to collect particles. However, the particles cut through the ship, and ground control knew that Jakub would not return to Earth. Jakub left the ship to spend his last moments with the alien in space. However, just before Jakub ran out of oxygen, a Russian shuttle saved him.

During their return to Earth, Jakub and his rescuers familiarized themselves with each other. Klara, Vasily, and Yuraj were Russian astronauts on a secret mission to investigate Chopra. Vasily became secluded because he heard imaginary voices. When Jakub spoke to Vasily, hoping that he had met the same alien, Vasily became obsessed with Jakub and protected him at all costs.

Once the shuttle broke through Earth’s atmosphere, Klara told Jakub that he would become a political prisoner. This caused Jakub to lunge for the controls to try to escape. He succeeded with the help of Vasily, but Jakub was the only survivor once the shuttle crash-landed. Jakub fled back to the Czech Republic, and reunited with Petr. The public thought that Jakub died on the mission, so Jakub returned to his childhood home after deciding against returning to Lenka.

More summaries and resources for teaching or studying Spaceman of Bohemia.