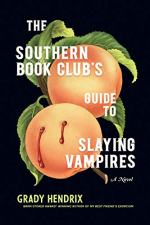 Grady Hendrix
This Study Guide consists of approximately 51 pages of chapter summaries, quotes, character analysis, themes, and more - everything you need to sharpen your knowledge of Southern Book Club's Guide to Slaying Vampires.

This section is labeled August 1993. The women had collected their evidence and were ready to meet with the police. Maryellen said that Ed was driving to get the detectives and then bringing them to Patricia’s house to hear their story. When they heard cars arrive, they were shocked to see that all of their husbands were together.

The husbands had been working together on a project called Gracious Cay, which was a gated community out by Six Mile. They were all investing in the project, and James had joined them, investing a huge amount of his own money. When Ed found out that the women had a wild theory about James, Ed went to their husbands to prevent the women from embarrassing themselves and James.

The husbands were all furious, except for Kitty’s husband, Horse, who was kind to her. They allowed...

(read more from the "Psycho" Summary)