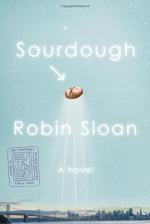 Sloan, Robin
This Study Guide consists of approximately 45 pages of chapter summaries, quotes, character analysis, themes, and more - everything you need to sharpen your knowledge of Sourdough.

This detailed literature summary also contains Quotes and a Free Quiz on Sourdough by Sloan, Robin.

The following version of this book was used to create this study guide: Sloan, Robin. Sourdough. MCD Farrar, Straus and Giroux. 2017.

Lois Clary had just moved to San Francisco to begin working at General Dexterity, a programming company that specialized in the development of robot arms. The company’s penchant for trying to distance itself from humanity’s flaws caused Lois to feel artificial and stressed. Lois needed some comfort, and she found it in the form of take-out food from a restaurant called Clement Street Soup and Sourdough.

Lois fell in love with the spicy food created by Beoreg and Chaiman, the enigmatic owners of the restaurant. This is why she became distraught when they told her that they had to leave the country. However, before they left, they gave Lois the starter for their sourdough and told her that it was a tradition that she must keep alive. They taught her how to sustain the starter and how to make the sourdough bread before they left the country for the last time.

Beoreg and Chaiman’s gift changed Lois’s life. She developed a passion for baking and used it as a respite from the ennui of her daily life as a programmer. As she became more familiar with the starter, Lois began to notice that it had some mystical characteristics. For example, she noticed that the starter was singing, displaying fluorescent lights, and moving around by itself. Furthermore, Lois’s bread came out of the oven with faces encrusted on the tops of the loaves.

After realizing that the starter caused her bread to be delicious, Lois began to share her food with other people, one of whom was Chef Kate, the chef at General Dexterity. She told Lois to audition for a space at the farmer’s market. Lois took Chef Kate’s advice and went to the farmer’s market audition ceremony, which took place at the Ferry Building. Despite its extreme exclusivity, Lois won a spot at a secretive underground market known as the Marrow Fair.

Upon her arrival at the Marrow Fair, Lois discovered why the fair was unique in that each exhibit was a combination of food with some technological advancement. Lois was told by the leader of the fair that she must use one of her robot arms from General Dexterity to help make her bread.

After copious amounts of practice and coding, Lois managed to combine her technological prowess and baking skills to create a successful exhibit. However, the more bread she produced, the lss control she seemed to have over the sourdough starter. Eventually, the starter grew out of control. Lois had been exchanging emails with Beoreg, and he had told her stories about his culture, the Mazg, and about how their starter had caused immense problems for civilizations in the past. Lois decided that she would dispose of the starter.

However, Lois had some trouble disposing of the starter. One of her colleagues at the Marrow Fair, Dr. Jaina Mitra, wanted to study the starter for her microbiological experiments. This led to Jaina stealing some of the starter and experimenting with it in secret, which caused an explosion of microbes from the starter that almost destroyed the Marrow Fair. After this incident, Lois decided to create her own sourdough starter and move to Europe with Beoreg to help him run a restaurant.

More summaries and resources for teaching or studying Sourdough.