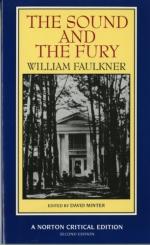 The Sound and the Fury Summary & Study Guide

The Sound and the Fury Summary & Study Guide Description

The Sound and the Fury Summary & Study Guide includes comprehensive information and analysis to help you understand the book. This study guide contains the following sections:

This detailed literature summary also contains Quotes and a Free Quiz on The Sound and the Fury by William Faulkner.

The Sound and the Fury by William Faulkner is a story about the brothers of the Compson family and their obsession with their sister, Caddy. The story is told in four chapters, three chapters are told in the viewpoint of the three brothers. The chapters do not follow a strict timeline, but jump back and forth in time. This is confusing to the reader and difficult to understand.

The story is told in the viewpoints of the following characters: Benjy Compson, a severely mentally-challenged thirty-three year-old man in April, 1928; Quentin Compson a Harvard student speaking in June, 1910;Jason Compson, IV, a farm-supply store worker speaking in April, 1928; and Dilsey, the Compson cook who has helped raise the children. The brothers’ stories are told through memories, thoughts, and interactions with others. Their thoughts center upon their sister Caddy. Through their memories and thoughts, they silhouette the fall of their once prominent family. Faulkner uses the Compson family to show the fall of the Southern aristocracy after the Civil War.

The Compson family was once considered to be one of the prominent families in Jefferson, Mississippi. Caroline Compson took great pleasure in feeling superior to those around her. The slow decline of the family has dwindled their wealth, land, and significance in the community. Mr. Compson is an alcoholic, and Mrs. Compson is a hypochondriac, who leaves the raising of her children to the Negros who work for the family. Quentin is the oldest, who feels that it is his job to look after the others. Caddy is a free-spirit who stubbornly does what she wants. Jason is mean-spirited and spies on the other children for his mother. He is not liked by the other children. Benjy is severely mentally-challenged and does not understand time and space. Caddy becomes the central figure in the boys’ lives since their mother does not care for them. The mother stays in her bedroom complaining of an illness that will soon take her from them.

Caddy becomes pregnant as a teenager, and this leads to the downfall of the family. Quentin feels it is his responsibility to take care of her and tries to claim the baby is his. His family does not believe this and sends him to Harvard. They sell part of their land to pay for his tuition. This leads Quentin to drown himself before the end of his first year at Harvard.

Caddy meets and marries a man attempting to pass the baby off as his. He is a banker and offers to give Jason a job at his bank. He soon learns that Caddy is pregnant and not with his child. He divorces her. The Compsons’ disinherit Caddy over her pregnancy. However, when her husband throws her out, they take in her child Quentin. Quentin, named after her brother, is just like her mother. She sneaks out and meets boys.

Jason, bitter about losing out on a good job, takes the money that Caddy sends for raising Quentin. He works at a menial job in a farm supply store and blames Caddy for his lack of success. Quentin and Jason do not get along. She is rebellious like her mother. Quentin steals the money that Jason has acquired over the years of taking from Quentin's mother and runs away. Jason goes after her, but he does not find her.

Faulkner displays the three men in Caddy’s life. The first is a sensitive man who cannot handle the problems of his family so takes his own life. The second is a mean-spirited cynic who does not trust anyone. The third is a man who does not understand anything around him.