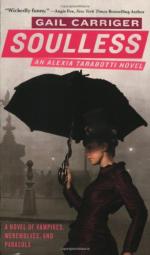 Gail Carriger
This Study Guide consists of approximately 41 pages of chapter summaries, quotes, character analysis, themes, and more - everything you need to sharpen your knowledge of Soulless.

Soulless by Gail Carriger is a novel of many genres. Its setting is London, England in Victorian times. The culture is more than one: werewolves, vampires, ghosts, and the natural humans. We also have one preternatural who is a soulless person who can touch a supernatural person and neutralize them. The mixed society is involved in the comedy of manners. Propriety is the top priority. We have the steam-punk genre that showcases the inventions of the day. The werewolves and vampires seem to have the market on the inventions. We also have scientists who hide their devious tricks and horrible experiments to bring London under the power of one man.

It is a love story between the preternatural and the alpha werewolf. Both the hero and heroine are strong characters. The lovers save the day and stop the evil from winning in the struggle between good and evil. Alexia is a natural detective who sees her moving about in the supernatural culture more than in her own. When werewolves and vampires turn up missing, Alexia is determined to discover what is happening. There are a couple of attempts made on her life before she is kidnapped. Maccon tries to keep her safe. He has her watched by members of his pack. When the full moon occurs, he has vampires set to watch her.

The mad scientist has her in his clutches and is prepared to do all kinds of horrible things to her to understand her power so he can control it. The climax comes during the full moon. The scientist has the oldest vampire in his experimenting room. He takes Alexia to see the horrible torture chamber. He is holding Maccon, the alpha werewolf. He thinks he has the upper hand. However, with his unmasking, everything turns to true chaos. The vampire and werewolf win over the mad scientist.

Before the end of the book, our heroine Alexia Tarabotti has been invited to join the Shadow Council, which is the Council of the supernaturals who advise the Queen. Alexia is chosen to keep a balance between the supernatural leaders of the Council. Society has been saved and will go back to each group living with the other and respecting each other. Lord Maccon has made an excellent hero and lover and taught the reader all about werewolves. He has overcome his natural instinct when he is endangering his love. Peace is reigning and Queen Victoria and her country are safe. The country lives in harmony. Alexia and Maccon are married in the epilogue. It is clearly apparent that this union is a love match.

More summaries and resources for teaching or studying Soulless.