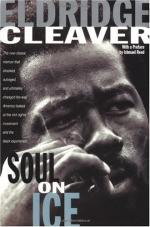 This detailed literature summary also contains Topics for Discussion and a Free Quiz on Soul on Ice by Eldridge Cleaver.

Eldridge Cleaver was imprisoned at least twice. By his own admission, he was in possession of "a shopping bag" full of marijuana resulting in his first prison sentence and committed a series of rapes resulting in the second. Cleaver is a complex man and the book is his path toward self-discovery. The book is Cleaver's account of a series of actions leading up to and during the American Civil Rights movement. Cleaver also discusses at length the complicated interactions of the social classes, races and genders, focusing on blacks and whites, men and women, the "haves" and the "have nots."

The story begins and ends in Folsom Prison, includes a series of short vignettes and personal correspondence between Cleaver and Beverly Axlerod, and attorney for whom Cleaver confesses a physical attraction. Cleaver talks extensively of his own need for fulfillment and what it takes to attain that. He is haunted by his own desire for white women and ashamed of his lack of desire for black women. He explores the reasons for those social taboos against that desire and the reasons they exist. According to Cleaver, black men have been forced by society to become the brute force performing all the menial tasks necessary for daily life. White men have become the "mind" of the nation, making the important decisions and overseeing the black man. By sheer necessity, those white men have become weaker physically, almost effeminate. The white women must then become more feminine to make up for the effeminate nature of their men, all the while desiring the brute strength of the black man. The black woman is in a similar position, forced to become strong to perform the many domestic skills necessary for whites to be comfortable. That very strength becomes the thing that puts the black man off, forcing the black man's attention on that desirable feminine woman - the white woman who is ultimately unattainable to the black man.

The complex relationships are made more so by the addition of the social classes, the desire of white men to become more physical and the desire of black men to become mentally stronger. Cleaver looks at the details of those interactions with a critical eye, often accepting blame for his own shortcomings but more often putting the fault squarely on the shoulders of those who oppressed the black man for centuries.