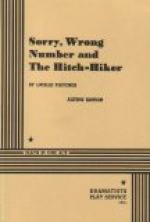 Lucille Fletcher
This Study Guide consists of approximately 15 pages of chapter summaries, quotes, character analysis, themes, and more - everything you need to sharpen your knowledge of Sorry, Wrong Number.

Mystery is a dominant theme in the play Sorry, Wrong Number by Lucille Fletcher. Mystery involves elements of the unknown. There are two mysteries in Fletcher’s play, both of which concern Mrs. Stevenson. While one of these mysteries is solved, the other is left open-ended. Mrs. Stevenson is the victim of the murder plot. However, the second mystery about the murderer's boss is speculation based on Mr. Stevenson's urgent trip out of town and a logical motive for having his wife killed.

The first appearance of terror in Mrs. Stevenson...