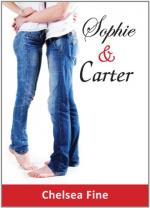 This detailed literature summary also contains Topics for Discussion and a Free Quiz on Sophie & Carter by Chelsea Fine.

Sophie and Carter is a novel by new writer Chelsea Fine. Sophie is a few weeks from high school graduation, but she is not the typical teenager. Sophie has three younger siblings whom she has been raising in her mother's absence. Carter, her next door neighbor, is the only one who knows the truth. At school, Sophie and Carter pretend they barely know each other, but at night each is the other's only salvation. Sophie and Carter is a touching love story about a new brand of teenager, the ones who are forced to take on more responsibility than any teenager should have to shoulder.

Sophie runs into Carter in the hallway and is pleased to see him, but their flirtation appears to go only skin deep. Later, as Carter follows Sophie home he thinks of how empty his day would be without these little contacts with Sophie. School is a place where they can be normal, albeit a strange sort of normal. At home, however, everything changes. Sophie takes on the burden of raising her three younger siblings alone, while Carter must care for his beaten down and brain damaged mother.

Sophie helps her siblings with their homework, catching glimpses of Carter through their kitchen windows as he helps his mother deal with the hallucinations brought on by too much alcohol and mental illness. At the same time, Carter catches glimpses of Sophie as she tries to keep the chaos of three growing kids under control. It is only after the kids are in bed and Carter's mother is passed out that they are able to find a little comfort in each other as they sit on the porch swing and watch the neighborhood settle down for the night.

Sophie becomes jealous when a girl Carter once dated asks her about him. Later, Sophie and Carter argue when he accuses her of dating the wrong kind of boy. The angst brings up memories for both of them, Sophie remembering instances in which she saw Carter's long gone father beating him and Carter remembering a day when Sophie's mother placed her daughter in danger by bringing home her unsavory clientele.

Carter overhears Sophie telling his mother how difficult it is for her son to love anyone. Carter is touched by Sophie's words and surprises them both by admitting to his feelings for Sophie. Later, Sophie sneaks into Carter's room and confirms what he has always known, that she loves him too. A few days later, Carter's mother is taken away by the state when she accidentally lights the house on fire. A short time after that Sophie and Carter graduate from high school. Together, they decide it is time to change their lives, to make a new start. Carter packs up Sophie and her siblings, taking them away from the life they have led to make a new life together.