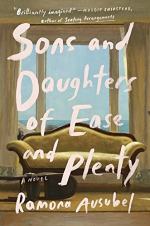 Sons and Daughters of Ease and Plenty: A Novel Summary & Study Guide

Ramona Ausubel
This Study Guide consists of approximately 94 pages of chapter summaries, quotes, character analysis, themes, and more - everything you need to sharpen your knowledge of Sons and Daughters of Ease and Plenty.

Sons and Daughters of Ease and Plenty: A Novel Summary & Study Guide Description

Sons and Daughters of Ease and Plenty: A Novel Summary & Study Guide includes comprehensive information and analysis to help you understand the book. This study guide contains the following sections:

This detailed literature summary also contains Quotes and a Free Quiz on Sons and Daughters of Ease and Plenty: A Novel by Ramona Ausubel.

The following version of this book was used to create this study guide: Ausubel, Ramona. Sons and Daughters of Ease and Plenty. New York, Riverhead Books, 2016. Hardcover.

In 1976, Fern and Edgar Keating and their three children approach the end of the season at their idyllic summer home when they learn that Fern’s family’s money is gone. Fern believes Edgar should accept his place as the heir to his family’s steel fortune, but Edgar feels betrayed, not least because if he returns to his parents he will not be able to publish the novel he has been working on for ten years, which is about leaving his parents and their money behind. Edgar lashes back by beginning an affair with another vacationer, Glory.

The novel splits into two alternating timelines: the events of the ensuing week, and a slow chronological detailing of the family’s past from the childhoods of Edgar and Fern’s parents up to the present day. The past chapters introduce Evelyn and Paul, Fern’s affluent and distant parents, and her beloved twin brother, Ben. Fern blames her parents for their neglect in allowing Ben to be drafted for the Vietnam War, admitted to a mental hospital, and then killed by electroshock therapy and lobotomy. The past sections also detail the rise to success of Edgar’s parents, Mary and Hugh, who give Fern and Edgar an unlimited allowance after their wedding so they can pursue their rebellion and return when they are ready. The young couple struggle to accept their life of privilege while searching for authentic experiences; Edgar goes so far as to enlist in the Vietnam War in an attempt to be like everyone else, but his father’s influence diverts him to an administrative post in Alaska. While he is away, Fern give birth to their daughter, Cricket. When he returns they continue their search for meaning, Edgar by writing his novel and Fern by pursuing a degree at Radcliffe. She is interrupted by her second pregnancy, and after she gives birth to twins Will and James, she focuses on being a wife and mother.

In the novel’s primary time, the first week of the school year in 1976, Edgar continues to retaliate against Fern by inviting her to a dinner with his lover, Glory, and her husband, John. The lovers intend for Fern and John to sleep together in order to justify their own affair, but when Fern realizes this intention she storms out and makes Edgar leave. Fern and Edgar each depart on a journey, not realizing the other is also leaving. Edgar and Glory sail east toward Bermuda, where Edgar seeks simplicity, freedom, and distance. Fern meets a giant, Mac, who reminds her of Ben, and the two of them depart on a road trip west across the U.S. to reunite Mac with his son.

Meanwhile, Cricket teeters between childhood and adolescence, a difficult period only complicated further by her parents’ accidental abandonment and by her sexual assault in a school bathroom by an unknown assailant. Cricket does her best to keep her brothers safe until the family is reunited, inspired by the fabricated stories about Plains Indians she has been told by her teacher—and crush—Miss Nolan.

When Edgar’s glasses are lost at sea, his helplessness reminds him of the importance of home and family, and he turns back. Fern sleeps with Mac but reaches a parallel realization that her family matters more to her than anything else, and when she learns that her children have been alone for days she makes sure that Mac, now a good friend, reunites with his son, then catches a plane to reunite with her own family. Edgar and Fern have each changed their opinion about the right solution to the financial problem, but their final decision is left unexplained as Edgar accepts his parents’ offer to return, but Edgar and Fern still prepare to downsize their luxurious home. The novel’s close focuses on the emotional reconciliation between Edgar and Fern, connecting it to moments throughout their histories both apart and as a couple.

More summaries and resources for teaching or studying Sons and Daughters of Ease and Plenty: A Novel.

Sons and Daughters of Ease and Plenty: A Novel from BookRags. (c)2022 BookRags, Inc. All rights reserved.