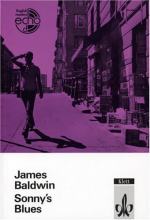 James Baldwin
This Study Guide consists of approximately 21 pages of chapter summaries, quotes, character analysis, themes, and more - everything you need to sharpen your knowledge of Sonny's Blues.

The narrator learns of his younger brother’s arrest from a newspaper article. He dwells on the news all day long, while teaching algebra at a high school in Harlem. He wonders if the boys in his class are shooting up, too. The narrator remembers his younger brother, Sonny, back when he was in high school, with a bright and open face and wonderfully direct brown eyes.

After school the narrator converses with Sonny’s friend. The friend wonders if he’s partly responsible for Sonny’s addiction, since he once told Sonny that doing heroin felt great. The narrator and Sonny’s friend discuss the likelihood that Sonny will be sent away someplace to be cured. Sonny’s friend imagines the problem will start over again after they let Sonny out.

The narrator doesn’t contact Sonny in rehab until after the death of his own daughter, Gracie. Sonny’s letter in reply makes the narrator feel like a bastard. Sonny apologizes for disappointing people who believed in him and expresses his need to get outside. He hopes his brother will meet him in New York when he is released. After that, the brothers do keep in touch, and they meet when Sonny is released.

The seven years’ age difference between the narrator and Sonny has always kept them from being close. The two grew up in Harlem. The houses they grew up in are long gone, replaced by more housing projects. James Baldwin describes the hopeless situation that boys in Harlem face – leaving their smothering houses for the streets, seeking light and air, but finding themselves encircled by disaster. Some escape, but they leave a piece of themselves behind.

The narrator and his wife, Isabel, live in Harlem by choice. Isabel makes Sonny feel welcome and at ease in their home, while the narrator can’t help studying Sonny for signs of addiction.

The narrator remembers that his own father once said no place was safe for kids. Daddy passes away when Sonny is fifteen, and at that time Mama asks the narrator to protect Sonny. She explains that their Daddy once had a brother, but he, along with his guitar, were run down by a group of drunk white men. Daddy witnessed his brother’s death. Only Mama ever saw his tears, and she decided they should keep the story secret from their sons. The narrator promises to look out for Sonny, overwhelmed by Mama’s words and her tears. However, at the time, the narrator is in the army and about to be married, and his promise is soon forgotten.

When Mama dies, the narrator comes home on furlough and remembers his promise. Trying to act like a father figure, he asks Sonny about his plans for the future. To the narrator’s dismay, Sonny wants to be a jazz musician. While the narrator is thinking of old-school jazz, in the style of Louis Armstrong, Sonny scoffs at that “old-time, down home crap” (p. 12). Sonny wants to play improvisational jazz, known as bebop, popularized by Charlie Parker. The difference in the brothers’ musical taste is one example of their generation gap. The narrator hopes Sonny’s desire to be a musician will be just a passing phase, and he makes arrangements for Sonny to live with his wife’s parents and go to school. Sonny just wants to get out of Harlem.

Sonny practices jazz during every free minute while he’s living with Isabel’s parents. He plays the same passages over and over on his record player and on their piano, and the family tolerates the non-stop strange music as best they can, until one day they learn that Sonny hasn’t been going to school. During the argument that follows, Sonny realizes that his precious music has been torture to everyone around him, and a few days later he runs away to Greece. Time passes, Sonny becomes a man, and the two brothers fight whenever they come into contact with one another.

The narrator moves forward in time again to the time when his daughter Gracie dies, months after he learns of Sonny’s arrest. Gracie dies of polio at the age of two. She suffered a great deal, screaming, and unable to walk. Isabel continues to have nightmares about her little girl. The narrator’s trouble makes Sonny’s trouble seem real, and that is what inspires him to write to Sonny in rehab.

Sonny lives with the narrator and Isabel after his release. The narrator is tempted to search Sonny’s room for evidence of drug use, but he is distracted by a revival meeting outside his window. The music seems to draw poison out of the people who are listening. Sonny is there too, and when he walks across the street the narrator notices his slow, loping walk, like a Harlem hipster, made unique with his own special half-beat.

Sonny invites his brother to hear him play at a nightclub that night in Greenwich Village. They discuss Sonny’s addiction openly for the first time. Sonny explains that heroin can make a person feel in control, and that if a musician thinks he needs that feeling, then he needs it. Sonny thinks it’s unfair that great music, like life, seems to require great suffering. He muses that people might as well do something bad, to create a reason for the suffering. Sonny admits he did bad things in the past, creating reasons for his suffering, mostly so he could get his next fix. Sonny confides that he wanted to leave Harlem after Mama died, mainly to get away from drugs. He acknowledges that he could start again at any time, and the narrator says he understands.

That night at the nightclub, the narrator realizes that Sonny is loved and respected in his world. A musician named Creole and two others form a quartet with Sonny. This is to be his first performance since his arrest over a year ago. At first, Sonny can’t find his place in the musical conversation of the quartet, even though the other three try to help him. Finally, with Creole’s patience and understanding, Sonny seems to find a brand-new piano beneath his fingers. His musical voice emerges.

Through Sonny’s music, the narrator experiences the pain and passion that Sonny could not express in words. The narrator feels the pain of his own past while listening. He comes to understand not only the beauty of jazz, but also the inner beauty of his younger brother, Sonny.

More summaries and resources for teaching or studying Sonny's Blues.