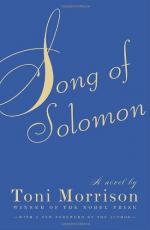 Toni Morrison
This Study Guide consists of approximately 38 pages of chapter summaries, quotes, character analysis, themes, and more - everything you need to sharpen your knowledge of Song of Solomon.

This detailed literature summary also contains Topics for Discussion on Song of Solomon by Toni Morrison.

Song of Solomon opens with Robert Smith, an insurance agent in an unnamed Michigan town wearing blue silk wings. He leaps from the roof of Mercy Hospital, claiming he will fly across Lake Superior. He does not fly, but instead dies from the fall. The next day, the first black child born in Mercy Hospital is born to Ruth Foster Dead, who is the daughter of the first black doctor in the town. The baby's name is Milkman Dead.

At the age of four, Milkman discovers humans cannot fly, which causes him to withdraw into himself. He is loved by his mother and aunt, Pilate, but does not reciprocate. He is described as odd by most people because of his withdrawn personality. His sisters, First Corinthians and Magdalene (called Lena), take care of him.

Milkman has an emotional disease that has origins in the oppressions endured by previous generations and passed to future ones. Milkman's father, Macon Dead, got his odd name when a drunk Union soldier filled out his documents incorrectly. Macon Jr. and his sister, Pilate, witness the murder of their father when they are younger, which scarred them, and caused them to be estranged from each other. Macon Jr. becomes obsessed with acquiring wealth. He is hated by his tenants as well as his family.

When Milkman is thirty-two, he learns from his father that his aunt, Pilate, may have millions of dollars in gold hidden in a green tarp hanging from her shack. Milkman robs Pilate, and finds out the green tarp is filled with rocks and the skeleton of Milkman's grandfather, Macon Dead I. Guitar Bains, who helped Milkman with the robbery is disappointed there is no gold because he needs it to carry out a mission for the Seven Days, which is a secret group dedicated to avenging African-Americans who have been wrongly accused of murdering innocent whites.

Milkman suspects the gold is in a cave near Macon's old farm in Pennsylvania. He leaves Michigan and heads south, promising Guitar a share of whatever he finds. Before leaving, Milkman ends his relationship with Hagar, which causes her to go crazy and attempt to kill him on several occasions. When Milkman gets to Montour County, Pennsylvania, he learns there is no gold. Instead, he decides to search for his family history. He meets Circe, who is the midwife who delivered Macon Jr. and Pilate. She tells him Macon's original name was Jake, and he was married to an Indian woman named Sing.

Milkman does not know Guitar is following him, and Guitar wants to murder Milkman because he feels cheated out of his share of the gold. Milkman is encouraged by what he learns from Circe, so he continues south to Shalimar, which is his grandfather's family's home in Virginia. Initially he is uncomfortable there, but grows to love the small-town atmosphere when he begins to learn more and more about his family history.

Milkman learns his great-grandfather was Solomon, the legendary flying African. The story is that he escaped slavery by flying back to Africa. He tried to take Jake, Milkman's grandfather, with him, but dropped him. Solomon abandoned his wife, Ryna, and their twenty-one children. Ryna went insane with grief over the loss of her husband, which left Jake to be raised by Heddy, the mother of Sing.

Milkman is changed by what he learns about his family history. He becomes a compassionate, responsible person with a sense of purpose. After surviving an attempt on his life by Guitar, Milkman returns home to tell Macon Jr. and Pilate what he learned. When he gets home, he finds out that Hagar died of a broken heart, and his family still faces many emotional problems.

Milkman goes with Pilate back to Shalimar, where they bury Jake's bones on Solomon's Leap, which is the mountain that began Solomon's flight to Africa. After the burial, Pilate is accidentally shot and killed by Guitar, who intended to kill Milkman. Milkman is heartbroken by Pilate's death, but because he is invigorated by his transformation, he calls out Guitar's name and leaps toward him.

More summaries and resources for teaching or studying Song of Solomon.