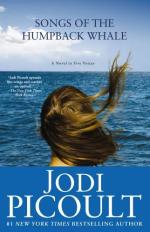 Songs of the Humpback Whale Summary & Study Guide includes comprehensive information and analysis to help you understand the book. This study guide contains the following sections:

This detailed literature summary also contains Topics for Discussion and a Free Quiz on Songs of the Humpback Whale by Jodi Picoult.

Songs of the Humpback Whale: A Novel in Five Voices, published in 1992, was Jodi Picoult's first novel. Set in 1990, the story spans the journey of three family members from San Diego, California to Stow, Massachusetts as they discover the reasons their family broke apart and the need for each other that drives them back together. Eminent marine biologist Oliver Jones understands whales better than he understands how to be a father and husband and so he uses his whale-tracking skills to track his wife and child across the country after they leave. Jane Lipton Jones, his wife, is a woman in search of herself after an abusive childhood and a verbally abusive marriage. Daughter Rebecca Jones at fifteen has survived a plane crash, a distant father, and an unhappy mother. She longs for the love she cannot find at home.

The story is told in fragments of 72 brief chapters over 346 pages from the points of view of Oliver Jones, Jane Lipton Jones, Rebecca Jones, Joley Lipton (Jane's devoted younger brother), and Sam Hansen, Joley's employer and friend. Reading the story is like putting together a jigsaw puzzle without the overall picture as a guide. The fragments gradually connect as the reader explores them from the different angles or points of view. Incidents are repeated from the various points of view so that the reader enjoys a richer, deeper experience of the conflicts among the characters.

Each of the voices telling the story is set off by a separate typeface and the chapters are titled with the name of the point of view character. Jane has 24 chapters. Oliver and Rebecca have an equal number of chapters with an unlucky 13 each. Sam, Jane's love interest, has 12 chapters. Joley has eleven. By this measure, the story is predominantly Jane's story with all the other voices blending into a background chorus to add depth.

The main action of the story is set into motion when Jane strikes her husband. Fearing that she has become violent like her father, she flees to the only person she really trusts—her younger brother Joley. Rebecca hastily packs and joins her mother on the cross-country journey from San Diego, California to Stow, Massachusetts. Jane calls her brother who directs her across country day by day through a series of letters at post offices along the way. He directs them on a scenic route to places he believes will help his sister and niece grow through discovery. Meanwhile, Oliver Jones has decided to track his wife and child using his whale hunting skills but he does not know his family well enough to effectively locate them. During his trek across America, his arrogance softens and he learns how to speak about his feelings.

When Jane and Rebecca reach Stow, Massachusetts and Joley, they both find real love. Jane falls in love with the orchard owner, 25-year-old Sam Hansen, who is ten years her junior. Rebecca falls in love with Sam's best friend Hadley Spregg who is 25-years-old, ten years older than Rebecca is. Jane's protectiveness or jealousy drives her to separate Hadley and Rebecca, which results in tragedy. In the end, she either repents or punishes herself for her love of Sam by returning with Rebecca and Oliver to San Diego. When the puzzle of the story is pieced together, the overall picture is a tragic opera told in lyrical prose.