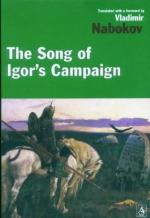 The epic begins with a tribute to Boyan, an eleventh century Russian bard who paid tribute in song to the military exploits of Russian princes. Nothing is known of Boyan other than the allusions to him in the Song. The author praises Boyan's poetic inspiration and names three princes who were subjects of Boyan's songs: the great ruler Yaroslav, prince of Kiev from 1019 to 1054; Mstilav, who was known as Mstilav the Brave, and Roman, who was killed by the Kumans in 1079. The author then says he will tell of events that happened in his own time, not in the past, and he introduces his subject: he will describe how Igor led the Russian forces against the Kumans in defense of Russian land. Then follows another brief apostrophe (direct address) to Boyan, in which he imagines how Boyan might sing of Igor's military campaign.