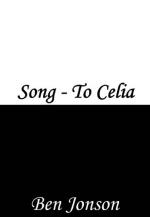 Additional Resources for Song: To Celia by Ben Jonson

Ben Jonson
This Study Guide consists of approximately 22 pages of chapter summaries, quotes, character analysis, themes, and more - everything you need to sharpen your knowledge of Song.

In this comparative study, Bentley focuses on the poetic skills of the two masters.

Eckhard, Auberlen, The Commonwealth of Wit: The Writer's Image and His Strategies of Self-Representation in Elizabethan Literature, Gunter Narr Verlag, 1984.

This work explores Jonson's expression of self in his works within the context of Elizabethan literature.

Levin, Harry, An Introduction to Ben Jonson, in Ben Jonson: A Collection of Critical Essays, edited by Jonas A. Barish, Prentice Hall, 1963, pp. 40-59.

Riggs offers a comprehensive look at Jonson and the age in which he wrote.

More summaries and resources for teaching or studying Song: To Celia.