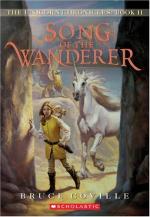 Song of the Wanderer Setting & Symbolism

Bruce Coville
This Study Guide consists of approximately 32 pages of chapter summaries, quotes, character analysis, themes, and more - everything you need to sharpen your knowledge of Song of the Wanderer.

Luster is the magical world that the unicorns and other mythical creatures inhabit. Cara first came to Luster using a amulet that her grandmother gave her.

Earth is Cara's home planet. She returns to it to bring her grandmother Ivy Morris back to Luster.

The Queen's Court is in Luster and changes location with the seasons.

Cara was given a amulet by her grandmother Ivy. Cara can use the amulet to open gates between earth and Luster.

Cara and her travel companions go the M'Gama's cave to find out which gate Cara needs to take to get back to earth.

M'Gama gives Cara a green ring. The ring glows whenever Cara hears "The Song of the Wanderer."

Grimwald gives Cara a red jewel while he is taking her and her travel companions on an...

More summaries and resources for teaching or studying Song of the Wanderer.

Song of the Wanderer from BookRags. (c)2022 BookRags, Inc. All rights reserved.