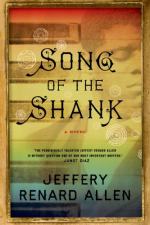 Song of the Shank Summary & Study Guide includes comprehensive information and analysis to help you understand the book. This study guide contains the following sections:

This detailed literature summary also contains Quotes and a Free Quiz on Song of the Shank by Jeffery Renard Allen.

Song of the Shank, by Renard Allen describes the life of Blind Tom and all of the caring and greedy people who care for him through the years. However, the story does not have a linear plot structure. It begins during Tom’s adult years, then goes back to the early years describing his childhood, his family, and the many people who take control of his life as both he and his talents and abilities grow. The reader sees the many ways in which Tom’s world is turned upside down over and over as he’s switched from owner to owner and manager to manager, throughout his developmental years with the backdrop of the Civil War looming greatly behind all aspects of his life and that of the entire country.

While still a baby, Thomas’ mother, Charity, realizes that he has been born blind. The entire family is placed at auction to be sold to another owner. General James Bethune buys the entire family and takes them to his plantation, Hundred Gates. There the family lives in the slave quarters and goes about the business of plantation work. Keeping up with a blind toddler proves to be a challenge. It actually takes his mother and sisters to accomplish this task, yet he still alludes them occasionally and gets into trouble and danger. As a toddler, Tom’s family is already aware of his special abilities that become evident to them and their owners, the Bethunes, when he is witnessed recreating and mimicking all sounds. He is fascinated by every sound he hears and often wanders off to explore a sound he hears in a world he cannot see. Soon the family realizes that Thomas is not only blind, but developmentally challenged as well. Charity, his mother, describes him as, “Her unusual son…She prefers the term curious” (Ch. 3, par. 12). He does many dangerous things, even poking sticks in his own eyes until they bleed. Mrs. Mary Bethune allows Charity to bring him to “the big house” while she does her chores. Here they all discover together that Thomas’ mimicking of sounds doesn’t stop with animals and the daily sounds around him. While waiting in the Bethune house for his mother to complete her work, Thomas, as usual, wanders off. He ends up in the room with the piano where the Bethune girls have recently had their lesson. He climbs onto the bench and plays the very songs that the girls had been practicing. Once General Bethune hears of and observes this talent, he moves Thomas into “the big house” with his family where Thomas is put on display before the town first and then on to bigger venues. He is now known on the stage as “Blind Tom” and to the newspaper and interested public as Tom Bethune, no longer Thomas Wiggins.

After General Bethune’s exploitation of Tom initially, the next person to manage and take advantage of Tom’s talents is Perry Oliver. He and his “understudy,” Seven, put much effort into trying to control and manage Tom with the idea that Tom will perform on stage making them a lot of money. Although Seven, a young boy himself, is the one who actually, not only took care of and trained Tom, but loved him too, their outcome is successful as expected. Tom stays with Perry Oliver and Seven for many years after they have groomed him for the stage. He is taken from city to city to perform his act and demonstrate his amazing abilities which include reciting speeches he has heard and entire chapters or sections of novels, all word-for-word. He gives interviews to the press and answers their questions with his own truthfulness and understanding of the world and his life. As the Civil War becomes a reality, he represents the Southern armies going to war and during various battles with patriotic songs.

In light of the impending loss of the Civil War by the South, General Bethune takes Tom from Perry Oliver. He tells Oliver that he has profited from Tom for many years and that he, Bethune, must take him back because he can’t be expected to lose everything after the losses at war. Tom can help General Bethune’s family financially. Oliver and Seven are devastated by the loss of Tom.

During the time when General Bethune is reaping rewards from Tom’s talent, a black man, named Tabbs Gross, approaches him and asks to take Tom with him and manage his career. He puts money upfront and offers the bulk of the payment when the contracts are signed. Although Mr. Gross meets alone; General Bethune brings his lawyer, Mr. Geryon; the stage manager, Mr. Warhurst; the pastor, Reverend H.D. Frye; and the medical specialist, Dr. Hollister. Although negotiations go better than Mr. Gross could have hoped, they sign contracts and transfer money, and they agree upon a location to trade Tom, himself. General Bethune has the money, but on the day that he is to bring Tom to Mr. Gross, he sends his lawyer saying that they found illegal activity in Mr. Gross’ past, and because he lied, the contract is voided. They keep Tom and most of Tabbs’ money.

Tom ends up in the custody of General Bethune’s son, Sharpe and his wife Eliza, who formerly worked for a Dr. McCunes, a black doctor who runs the Eternally Benevolent Asylum for Ill-Fated Offspring of the Sable Race. Eliza was the house matron who met Sharpe when Sharpe offered for Tom to give a concert for the patients in the asylum. At that time, Tom was being cared for by Sharpe and his stage manager, Thomas Warhurst. Eliza was added to Tom’s list of caretakers, along with the two men, between tours until the men left Tom in her care and never returned. She is the sole caretaker at that time.

When Eliza becomes Tom’s caretaker and the war is raging on, they hide at her home in the country, and she does not put him on stage. Since he is not in the public’s eye, his former child caretaker, Seven, finds another musical black man, a bit older than the real Blind Tom, and passes him off in concerts and tours as “the original Blind Tom,” since the real Tom is no longer in the spotlight.

At the war’s end, Mr. Gross decides to find Charity Greene Wiggins, Tom’s mom, and bring her to Edgemere, an all-black island of refugees and freedmen. He promises her a reunion with her long-lost son, Tom. Although she is there for several weeks before actually seeing Tom, he is eventually brought to her. While Charity is waiting at Edgemere, Tabbs Gross returns to New York City where he has discovers that Eliza lives with Tom in an apartment after she has been staying in the country, basically hiding Tom from the world. Tabbs goes to their apartment, tells Eliza that he is there to get Tom and return him to his mother since he is now a free man. Exhausted from the non-stop care of Tom and her feelings of isolation from the world, she lets him go. At Edgemere, Tom refuses to play music and is very cold to his own mother for quite some time.

When events at Edgemere take a turn for the worse and Charity is already in the city working in the refugee camps, Tabbs dresses as a woman, takes Tom and a young orphan boy whom he’s taken pity upon, and sneaks into the city and then further into the country where Eliza is now living once again, alone this time. He convinces her that it’s too dangerous for Tom in the North and suggests that the four of them travel together and move to the South where soldiers guard the blacks from harm since the war’s end. Along the way, Tabbs’ disguise is revealed, and he is attacked by the white men on the train. The young orphan boy, who carries a shank or blade in his belt, comes to Tabbs’ defense. Both are overtaken by the angry whites on the train. Eliza and Tom make it to their southern destination where they live in seclusion until the beautiful mysterious music coming from their apartment eventually comes to a stop.

Song of the Shank from BookRags. (c)2022 BookRags, Inc. All rights reserved.