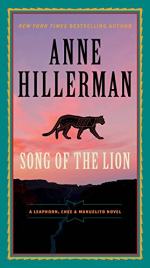 Anne Hillerman
This Study Guide consists of approximately 40 pages of chapter summaries, quotes, character analysis, themes, and more - everything you need to sharpen your knowledge of Song of the Lion.

Song of the Lion Summary & Study Guide includes comprehensive information and analysis to help you understand the book. This study guide contains the following sections:

This detailed literature summary also contains Quotes and a Free Quiz on Song of the Lion by Anne Hillerman.

The following edition of the book was used to create this study guide: Hillerman, Anne. Song of the Lion. Harper Collins, 2017. Hardback.

In tiny Shiprock, New Mexico, off-duty police officer Bernadette "Bernie" Manuelito is at a packed high school basketball game when she hears a large explosion from the parking lot. An car bomb has blown up a BMW, killing a passerby with the force of the blast. The car belongs to Aza Palmer, a high-powered lawyer from Phoenix who is originally from Shiprock. Palmer is in charge of mediating a contentious debate between real estate developers and nature conservationists about a proposed resort to be built at the Grand Canyon. The local police believe that Palmer is being targeted by bad actors on one side of the debate, and they assign him a personal police bodyguard, who happens to be Bernie's husband, Jim Chee. The man who had died in the blast happens to be Richard Horseman, Aza's nephew.

On the same night of the explosion, Chee and Palmer drive overnight to Tuba City, Arizona, a small town just outside of the Grand Canyon, where the negotiations are due to begin the following day. While the actual negotiations proceed very peacefully, the government building that is hosting the negotiations is repeatedly sabotaged -- one day the power cuts out, the next day the heat stops working during a chilly autumn day. Bernie comes to Tuba City to assist Chee, and happens to be with Aza when they run into his estranged son, Robert, who has a contentious relationship with Aza.

As the negotiations draw to a close, Palmer takes both sides out to the Grand Canyon to view the proposed location of the real estate development. During a group lunch, Palmer excuses himself to use the restroom, and Chee decides that it will probably be fine if he doesn't keep an eye on him. But Chee is wrong: Palmer is led into the foggy wilderness by Byrum Lee, a medic who has developed a large grudge against Aza. The reason for Lee's grudge is that, while he has developed a relationship with Palmer's ex-wife, Lona Zahne, Lona still has considerable feelings for Aza. Lee has beaten up Palmer by the time Bernie finally finds them in the fog. Lee then shoves Bernie down the mountainous slope, but she recovers and is able to locate Lee and Palmer again. Lee tries to throw a large rock at Bernie, but he slips and falls to his death. Bernie and Aza recover in the hospital alongside Robert, who had attempted to commit suicide by crashing his car, out of guilt for getting his cousin Richard involved in the initial car-bombing scheme.

More summaries and resources for teaching or studying Song of the Lion.

Song of the Lion from BookRags. (c)2022 BookRags, Inc. All rights reserved.