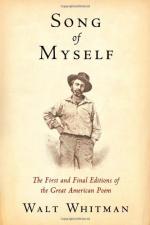 Song of Myself Themes

In "Song of Myself," Whitman uses "I" to refer not only to himself, but to a larger "I" that includes the reader and humanity in general. Invoking the universal "I" brings a sense of equality to the poem without directly addressing that theme. In its own mysterious way, though, the poem does deal directly with equality and democracy, primarily through Whitman's imagery and language.

Whitman's belief in equality is so strong, he dedicates the first lines of "Song of Myself" to it:

Here, "I" and "you" are used symbolically, not unlike the "myself" from the title that repeats itself in the first line.

The grass is used symbolically to indicate equality later in the poem:

Song of Myself from BookRags. (c)2022 BookRags, Inc. All rights reserved.