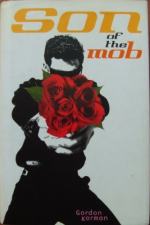 Son of the Mob Summary & Study Guide includes comprehensive information and analysis to help you understand the book. This study guide contains the following sections:

This detailed literature summary also contains Topics for Discussion on Son of the Mob by Gordon Korman.

"Son of the Mob" by Gordon Korman is the story of 17-year-old Vince Luca. Life isn't easy when your father is king of the Mob in New York and you end up dating the daughter of the FBI agent determined to put your father in prison. Vince has to figure out his place in a world that he doesn't agree with.

Alex, Vince's best friend, likes to live his romantic life through Vince. As the book opens, Vince is headed out on a date that turns disastrous. At first things are going well, then he discovers an unconscious body in his trunk. While this is par for the course in the Luca household, it isn't appreciated by Vince.

He always knew his home life was different from other children's home lives. His father worked at odd hours, and his mother said his father worked in the vending-machine business. Things didn't add up, though. There were always uncles in the home (even though his father was an only child), and the uncles were frequently injured and bullet-ridden. The family members could only talk about details of their life in one room in the house (his father's workshop in the basement) because the rest of the house was bugged by the FBI. Vince couldn't even play football like other kids because the members of the other team are scared to touch him, knowing who his father is.

After the game and at a party, Vince gets to know a girl named Kendra. He discovers that her father is an FBI agent so he doesn't want to establish a relationship with her, but they are thrown together in unusual circumstances when they both get banned from school for having head lice. During their time together, they realize they have a major connection. Vince tries to date her normally, while keeping his family life a secret.

One would think the romantic Alex would appreciate Vince's new relationship but instead he is becoming more sullen and withdrawn. Vince finds himself with a stressful romantic relationship (he finds out Kendra's father isn't just an FBI agent, he's the one determined to take down Anthony Luca, Vince's father) and in a strained friendship. To make things worse, he is inadvertently drawn into life in his father's business, and he is doing all he can to keep legal. He tries to help some of the men who owe his father money, but finds himself getting scammed. The family members also begin to suspect there is an inside man in the business trying to take Vince's father down. The only thing going well for Vince is the website he creates for class. Yet even that success is marred since the popularity of the site comes from strange advertisements he can't figure out.

Vince finds a way to stay legal, wash his hands of the business, expose the undercover plant in his father's business and keep his romantic relationship intact. This modern day "Romeo and Juliet" has a twist at the end. The heroes are determined to live.

Son of the Mob from BookRags. (c)2022 BookRags, Inc. All rights reserved.