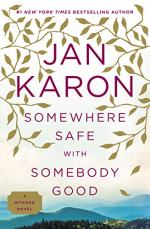 Related Topics
At Home in Mitford
A Light in the Window
Out to Canaan
These High, Green Hills

Jan Karon
This Study Guide consists of approximately 117 pages of chapter summaries, quotes, character analysis, themes, and more - everything you need to sharpen your knowledge of Somewhere Safe With Somebody Good.

Somewhere Safe With Somebody Good Summary & Study Guide includes comprehensive information and analysis to help you understand the book. This study guide contains the following sections:

This detailed literature summary also contains Quotes and a Free Quiz on Somewhere Safe With Somebody Good by Jan Karon.

Somewhere Safe with Somebody Good, by Jan Karon, is the story of Father Timothy Kavanaugh, a retired priest who lives in the small town of Mitford, and his struggle to find purpose in his retirement years. More than that, it is also the story of Timothy’s relationships with the people of Mitford and the many ways that the citizens of Mitford take care of one another.

The story begins as Timothy and his wife, Cynthia, are preparing to go to the retirement of Timothy’s doctor and long-time friend, Hoppy. Cynthia worries that Timothy will become one of those retired priests who just fades away.

Timothy goes to lunch with his friends J.C. and Mule. As they leave the restaurant, they see a limousine drive by with tinted windows. J.C. tells Timothy the Muse will be running a survey and posing a question in the next issue of the newspaper.

When Timothy reads the Muse he finds out the survey is asking who people think is the leading citizen and there is an article about whether or not Mitford still takes care of its own.

Timothy is invited to meet with the bishop about some problems at Lord’s Chapel where Timothy used to preach. Timothy sees Henry Talbot, the current preacher, and thinks he looks tired and depressed.

At home, Puny tells Timothy a man in a black car with tinted windows came to see him, but she didn’t get his name.

Timothy has Sammy, Kenney, and Harley over for dinner. Sammy teaches Timothy to play pool. During the lesson, Timothy makes a good shot and Sammy gets mad. He breaks his cue stick and leaves.

Timothy goes to the local salon to purchase a gift certificate and meets Shirlene. Shirlene asks Timothy to help her find a man.

Timothy goes to the book store that Hope owns. She tells him about her pregnancy and her worries that there will be no one to open the shop while she’s on bed rest. Timothy volunteers to come in one day per week.

Timothy meets with the bishop and learns that Henry Talbot will be leaving Lord’s Chapel amidst scandal. The bishop wants Timothy to take a temporary position there. After thinking about it and praying, Timothy realizes he does not want the job.

Sammy steals Timothy’s cue stick. Timothy decides to say nothing to Sammy, especially after Sammy quietly returns it. Instead, he purchases a new stick for Sammy and resolves to just love him and show him God’s grace.

Timothy goes to Lord’s Chapel and offers to fix up the rose garden at no cost to the church. He plans to pay Sammy to help him so that Sammy will have some work to give him a sense of purpose.

Henry Talbot’s wife calls Timothy in the middle of the night and tells him Henry is missing. Timothy and Dooley go looking for Henry. Henry has attempted suicide they take him to the hospital. Timothy calls the bishop to tell him about Henry. Timothy has to tell the congregation at Lord’s Chapel that Henry has left. He cries as when he makes the announcement.

Timothy and Sammy begin the work on the rose garden. Sammy is defiant and angry, but Timothy remains patient with him. Timothy discovers that Sammy has a knack for landscaping design.

Sammy steals Timothy’s Mustang and crashes it. Sammy is unhurt and Timothy decides not to press charges. Instead, when people ask him what he’s going to do about Sammy, Timothy says he’s just going to keep loving him and pray for him.

The limousine stops at the bookstore while Timothy is working. Timothy meets Kim Dorsay, a movie star, who is Irene’s long-lost twin sister. She asks him to set up a way for her to meet Irene. Cynthia and Timothy arrange a meeting and Irene is shocked but happy.

Timothy takes Sammy to see the wrecked Mustang and then takes him to the hospital to do some work on the hedges there. Timothy takes Sammy in to the hospital while he meets with some of the patients there. Sammy is very upset by a boy his age who has been seriously injured. He goes to the truck and Timothy finds him sobbing and angry and questing how God could let that happen.

Helene comes to Timothy’s house and tells him that Sammy is becoming a problem and it’s affecting her piano lessons. She asks Timothy to make him leave, but then agrees to give him a little more time.

Timothy decides it is time to talk to Sammy about his attitude and what he wants from life. He tells Sammy that if he chooses life, Sammy will have the help he needs and he also has God on his side.

Coot’s mother dies and Timothy goes to his house in the middle of a snow store to comfort him. The funeral takes place outside on a frigid day, but a crowd of people show up to support Coot.

Timothy continues to work at the bookstore and finds that he’s feeling happier and more relaxed. Sammy has also begun to change.

Cynthia and Timothy decide to set Shirlene up with Omer Cunningham who, like Shirlene, enjoys playing scrabble.

Timothy is voted Mitford’s leading citizen and receives a medal and a spray-tan package as prizes. He plans to donate the tanning package to the hospital fundraiser auction.

Sammy brings Cynthia a tiny kitten that he finds. Cynthia believes Sammy seems softer now. As Christmas approaches, Sammy suggests that he and Timothy build a cat door for the kitten as a gift to Cynthia.

Helene comes up with an idea to have a life St. Nicholas at the bookstore for Christmas. Timothy agrees to it knowing that it will boost sales. Helene wants him to play St. Nicholas, but he doesn’t want to.

Cynthia suggests they put a nativity set in the bookstore window. Timothy plans to put it in increments with the Baby Jesus appearing at midnight on Christmas Eve.

Several people step up to keep the store open nights in the days before Christmas. Even Sammy volunteers to help. Omer and Shirlene meet at the store on the night the group decorates the Christmas tree. They discover they’ve been playing Scrabble together online.

On the night the tree and lights are to be turned on at the store, a crowd gathers around. Sammy invites the onlookers into the store for cookies and works at the cash register. When St. Nicholas finally arrives, people can’t figure out who is in the costume. Timothy has recruited Coot to play the part.

Timothy asks Hessie to write an important article for the Muse and says Cynthia will give her the details. When the article is run, it reveals that Irene has a twin sister and that both Kim and Irene have made huge donations to the children’s hospital.

Dooley calls Timothy to tell him that he and Lace are engaged.

On Christmas Eve there is a huge snowstorm, but Harley shovels Timothy out so that he can go to the store to place the Baby Jesus. Timothy, Cynthia, and Sammy gather around the crèche and read lyrics from a Christmas hymn as they put the figure into the crèche.

On Christmas morning, Timothy finds the old Muse article about whether or not Mitford still takes care of its own. He believes the town has proven they do.

More summaries and resources for teaching or studying Somewhere Safe With Somebody Good.

Somewhere Safe With Somebody Good from BookRags. (c)2022 BookRags, Inc. All rights reserved.