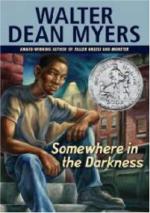 Walter Dean Myers
This Study Guide consists of approximately 17 pages of chapter summaries, quotes, character analysis, themes, and more - everything you need to sharpen your knowledge of Somewhere in the Darkness.

Somewhere in the Darkness Summary & Study Guide includes comprehensive information and analysis to help you understand the book. This study guide contains the following sections:

This detailed literature summary also contains Topics for Discussion and a Free Quiz on Somewhere in the Darkness by Walter Dean Myers.

Somewhere in the Darkness is a novel by writer Walter Dean Myers. Jimmy Little is a teenager who finds it difficult to attend school even though he is intelligent enough to graduate with honors. One day Jimmy comes home from school to find his father, Crab, waiting for him. Crab has escaped from jail and wants to take Jimmy to Arkansas where he believes an old running buddy can prove to Jimmy that Crab never killed anyone. When they arrive, Jimmy discovers that the truth does not matter as much as the search. Somewhere in the Darkness is a novel that looks closely at the relationship between a father and son that has been complicated by bad choices.

Jimmy Little goes to school for the first time in several weeks and discovers that the day has been cut short by testing. Jimmy returns home and finds a strange man waiting for him. This man claims to be Jimmy's father, Crab. Crab has been away in jail, serving time for an armored car robbery that ended in the deaths of one of the guards. Crab claims to have been released early from prison and that he must get to Chicago quickly to take a job that is required by his parole. Crab wants to take Jimmy with him.

Jimmy is reluctant to go with his father, but curiosity gets the better of him. As Jimmy and Crab drive to Chicago, Jimmy notices some oddness in Crab's behavior. Crab finally tells Jimmy that he has kidney disease and he escaped from the hospital where he was being treated out of fear that he would die without proving to Jimmy that he never killed the guard he is in jail for killing.

In Chicago, Crab takes Jimmy to meet a girlfriend of his from the past. Crab thinks this woman is going to drop everything and go to Arkansas with him, but she bails at the last minute. Instead, Crab steals some man's wallet and rents a car. Crab and Jimmy drive to Arkansas where Crab immediately sees a conjure man, hoping to learn something good about his illness. Instead, Crab learns that he is going to die.

The following day, Crab meets with the man who was most likely part of the armored car robbery for which Crab went to prison. Crab asks the man to tell Jimmy the truth, but he refuses. Crab and Jimmy walk to the creek only to learn that Crab's old friend has called the police. Crab attempts to escape, but he is caught by the police. Jimmy sits by his bed in the hospital and watches as he dies.

More summaries and resources for teaching or studying Somewhere in the Darkness.

Somewhere in the Darkness from BookRags. (c)2022 BookRags, Inc. All rights reserved.