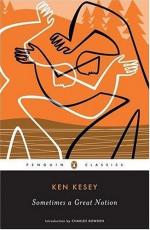 This detailed literature summary also contains Related Titles and a Free Quiz on Sometimes a Great Notion by Ken Kesey.

This innovative novel tells the multi-generational story of the Stampers, a lumber family in Oregon. Throughout the novel, tension-filled relationships within the family are echoed by the relationship the family has with a nearby town and its citizens, most of whom harbor generations-old resentments of the Stampers. More important than the novel's substance, however, is its style. Narrative voice and perspective shifts frequently between time periods and between characters, creating the thematically-relevant sense that there is no core truth, only interpretations of events.

The novel begins with a scene of confrontation. Union organizer, Draeger, arrives at the Stamper family home to confront Hank Stamper, who seems to have gone back on a deal he made with the union. After being confronted with a powerful symbol of the Stamper family's contempt, Draeger seeks out Hank's wife, Viv. He finds her in a local bar studying a family photo album. Her comments on some of the photographs it contains trigger a transition into an extended flashback. This makes up the action of most of the novel's remaining chapters.

The story of the Stampers begins with recollections of how the male members of the family have always been restless, moving ever further west until settled in Oregon. Being on the west coast, there was no further they could go. They stayed there and worked their way into the lumber business. Henry Stamper moves into the position of head of the family following his father's return to a family farm in Kansas, takes a young bride, and fathers Henry Junior (Hank). Hank's mother dies; Henry takes another bride, and then fathers Leland (Lee). Tensions between Hank and Lee emerge during their childhood and increase into their adolescence. It culminates in Lee's discovery that Hank is having a sexual relationship with his (Lee's) mother. She takes Lee back east to attend school and never returns home. Lee doesn't see his family for over a dozen years, and his mother commits suicide.

A few months after his mother's death, Lee receives a postcard insisting that he come home and help the family in a time of need. There's a strike in the lumber industry, but the Stampers are scabbing (filling the contracts of the striking workers). They need all the help they can get. Lee returns home with the intention of taking revenge on Hank for what he did to his (Lee's) mother. When he gets there, he discovers a kindred spirit in Viv, Hank's young, sensitive wife. As the increasingly senile Henry, the sullen Hank and the friendly cousin Joe-Bob teach Lee the ropes of the lumber business, Lee develops a relationship with Viv. They eventually see in her a means of taking revenge on Hank. Specifically, he intends upon having an affair with her and destroying the trust in their relationship. The lonely Viv responds to his attentions, but before they can act on their mutual attraction, tragedy strikes. As the family struggles to meet a contract, Joe-Bob is accidentally killed, and Henry loses an arm.

In the aftermath of the accident, Lee and Viv make love, and Hank beats a long-time rival to a bloody pulp. After begging Viv to come back east with him and accepting her refusal, Lee prepares to move. Before he goes, however, Lee and Hank get into a fistfight on the dock by the house, and surprise each other by battling to a draw. Because of this fight, Lee realizes he can't leave, because that would concede defeat. Viv, however, prepares to leave, takes with her a photo album, and waits in the town bar for the bus to take her out of town. This returns the action to the point at which the first chapter ended.

After saying goodbye to Draeger, Viv catches her bus and leaves town, watching Hank and Lee riding logs on the river as she goes.