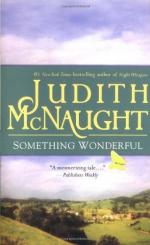 Judith McNaught
This Study Guide consists of approximately 40 pages of chapter summaries, quotes, character analysis, themes, and more - everything you need to sharpen your knowledge of Something Wonderful.

Something Wonderful Summary & Study Guide includes comprehensive information and analysis to help you understand the book. This study guide contains the following sections:

This detailed literature summary also contains Topics for Discussion and a Free Quiz on Something Wonderful by Judith McNaught.

Something Wonderful is a romantic love story about Alexandra, a young girl living in the country, who takes care of her mother and elderly servants and was taught that everyone is inherently good, and Jordan, a jaded Duke who believes all women are evil opportunists that just want to get the best of him. The two meet in an unexpected attack by two bandits, and when Jordan jeopardizes Alexandra's reputation in her village, he is coaxed into marrying her. The story is about how they deal with their forced marriage and how they learn to love each other along the way. Both of them learn a lot from each other, and while Alexandra merely learns the artificial and superficial laws of society, Jordan learns truth, honesty and sincere love.

When Alexandra thinks that Jordan is dead she devotes her life to honoring him. However, her memory and adoration of him is quickly ruined when she learns that he wasn't the noble man that she once thought. In fact, he was deceitful and planned to keep her locked away at his estate in Devon and use her only to create an heir. He was exactly like her father, who she lost all love and respect for when she found out he had another family in London, and she and her mother were his second-choice family he kept hidden and locked away.

Alexandra decides she will play by societal rules and learns to flirt and is quickly admired by the wealthiest and most prosperous men. Men write poems and stories for and about Alexandra, and one man was so lustful for her that he tries to kidnap her. In order to keep her safe, the dowager duchess and Anthony, Jordan's cousin, decide that it would be best that she marry Anthony. As they are about to wed, Jordan runs in and stops the wedding.

They spend the next few days learning about each other. They make a wager that if Alexandra does not fall in love with Jordan in three months, then she is free to go back to Morsham and live out her life in the dreary little village. Alexandra fights her emotions for Jordan as long as she can, but just as she is falling back in love with him, she is suspected of being responsible for his attempted murder. Everything gets resolved in the end when all of the misunderstandings are explained, and the true culprits behind the attempts on Jordan's life are discovered. Alexandra and Jordan are then free to love and learn from each other.

Something Wonderful from BookRags. (c)2022 BookRags, Inc. All rights reserved.