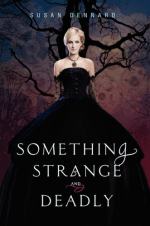 Susan Dennard
This Study Guide consists of approximately 36 pages of chapter summaries, quotes, character analysis, themes, and more - everything you need to sharpen your knowledge of Something Strange and Deadly.

Something Strange and Deadly Summary & Study Guide includes comprehensive information and analysis to help you understand the book. This study guide contains the following sections:

This detailed literature summary also contains Quotes and a Free Quiz on Something Strange and Deadly by Susan Dennard.

When Susan Dennard's young adult novel "Something Strange and Deadly" begins, sixteen year-old Eleanor Fitt, the protagonist and narrator, is a very proper young woman. She is doing her best to fit into Philadelphia's society and to live up to the high expectations of her mother. However, she secretly dislikes doing so. Her family's fortune is in sharp decline years after the death of her father. Now, her brother Elijah has disappeared. At a party hosted by Mama Fitt, a dark spirit is conjured. The spirit and a cryptic note that her brother Elijah is being held hostage convince Eleanor to seek out the Spirit-Hunter trio, Joseph, Daniel, and Jie, who are protecting the International Centennial Exhibition from the walking Dead.

The Spirit-Hunters agree to take on Eleanor's case. At the same time, Eleanor is being encouraged to court Clarence Wilcox, Philadelphia's most eligible bachelor. Clarence begins to lose his old friends one by one as more and more of the Dead come to populate the nearby Laurel Hill Cemetery. Though Eleanor cares for Clarence, she begins to grow close to Spirit-Hunter Daniel. Ultimately, it turns out that the dead are being controlled by a necromancer, and the necromancer is Elijah. After being bullied in school by Clarence and his friends, Elijah is hunting them down one by one. Eleanor is horrified, especially when Elijah kills Clarence.

When Eleanor tries to stop Elijah from raising the body of their father from the dead, their father's body turns against Eleanor. Elijah sacrifices his life to save Eleanor. The dark spirit which was conjured previously then assumes control of Elijah's body and flees as Eleanor learns she has the power to control the dead as well. She uses her power to stop them. The Spirit-Hunters then leave and go after the necromancer. Eleanor decides to stay behind to take care of her mother.

More summaries and resources for teaching or studying Something Strange and Deadly.

Something Strange and Deadly from BookRags. (c)2022 BookRags, Inc. All rights reserved.