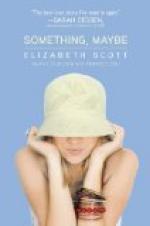 Elizabeth Scott
This Study Guide consists of approximately 39 pages of chapter summaries, quotes, character analysis, themes, and more - everything you need to sharpen your knowledge of Something, Maybe.

Something, Maybe Summary & Study Guide includes comprehensive information and analysis to help you understand the book. This study guide contains the following sections:

This detailed literature summary also contains Topics for Discussion on Something, Maybe by Elizabeth Scott.

"Something, Maybe," written by author, Elizabeth Scott, is a novel that tells the story of Hannah Jackson James and her journey of self-acceptance as she comes to terms with her past, her parents, and, most importantly, herself. The story begins by introducing Candy Madison, Hannah's mother, who is known for being a sex symbol and for being a past "special girl" of Jackson James, a 72-year-old man and also Hannah's father. Hannah describes herself as a 17 year old girl living in Slaterville, as small town where she tries to blend in because of who her parents are. Also at the beginning of the story, the reader meets Josh, Hannah's "soul mate," Finn, a mostly nice but annoying co-worker and classmate, and Teagan, a 19-year-old who is Hannah's best friend, as well as her voice of reason and truth.

As the story progresses, the reader becomes more familiar with the major and minor characters of the book. It is revealed that Hannah's step-father, Jose, passed away five years ago, causing her and her mother to leave Queens, New York and move to Slaterville. It is clear that Jose was an important and loving person in both Candy and Hannah's life. Hannah and Candy's relationship appears positive overall however Hannah seems easily embarrassed by Candy. Hannah begins to notice that Josh may not be her "soul mate" and that she has an effortless connection with Finn. A conflict starts for Hannah when realizes that she may have feelings for Josh and Finn and this conflict continues for her throughout the book.

When Hannah's father is more thoroughly introduced, it becomes clear that Hannah feels unloved and that she harbors feelings of resentment towards him. After insisting that she come to New York and that no cameras would be present, Hannah agrees to visit Jackson. When she arrives, she feels that he is sincere when he apologizes for his absence in her life and says that he wants to give their relationship a second chance. Hannah quickly finds out, however, that Jackson lied to her again when a camera crew arrives. Despite her attempts to escape the situation, Jackson is able to use her brief appearance on camera against her in order to boost his show's ratings. When this causes problems for Hannah at school and she realizes that Jackson is selfish and will never change, she chooses to end their relationship for good.

In the midst of her struggles, Hannah continues her relationships with Josh and Finn. She finds it harder to deny her connection with, and attraction to, Finn although her focus remains on Josh. However Hannah's opinion about him changes permanently when she realizes that he is using her to get close to Candy. After an important conversation with her mom, she realizes that her mom sincerely enjoys her job, is still grieving Jose's death and is now scared to love for fear of being left alone. Seeing that she has also been scared to love and be loved, Hannah realizes that her feelings could also lead to loneliness and she allows herself to acknowledge and act on her feelings for Finn, who is only too happy to return her feelings. The story ends with Hannah accepting who her parents are and where they are in their life journey, understanding how their life choices and perspectives have influenced her and realizing that she no longer needs to define herself by her parents and their choices, leading Hannah to a place of true self-acceptance.

More summaries and resources for teaching or studying Something, Maybe.

Something, Maybe from Gale. ©2005-2006 Thomson Gale, a part of the Thomson Corporation. All rights reserved.