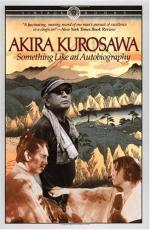 Something Like an Autobiography Summary & Study Guide includes comprehensive information and analysis to help you understand the book. This study guide contains the following sections:

This detailed literature summary also contains Topics for Discussion and a Free Quiz on Something Like an Autobiography by Akira Kurosawa.

"Akira Kurosawa, Something Like an Autobiography" is the life story of the renowned Japanese filmmaker. Among the movie elite, he is considered one of the best. His movie, "The Seven Samurai" ranks with the likes of "Citizen Kaine" and "Casablanca." The western American movie, "The Magnificent Seven" is based on the "Seven Samurai"; imitation signifying the sincerest form of complement. His movie "Rashomon" won the Academy Award for Best Foreign Film.

Akira Kurosawa subtitles his story with the line: "something like an autobiography." No doubt this references the rather unstructured style in which he writes his story. The beginning of his story is written in snatches of memories and episodes that at times do not seem cohesive. However, the story does eventually provide continuity as it connects lessons learned in his early life to his adulthood when he enters the tough world of filmmaking. Being the protected baby of a large family did not naturally prepare him for conflict and confrontation. His father and older brother both sensed that he needed toughening up for whatever may lay ahead. In their own ways, they each provided ways in which he was able to strengthen both mind and body.

Through trial and error and through hope and tragedy, Akira Kurosawa works his way unintentionally toward a successful career as a filmmaker. Beginning as a child, his interest in film was piqued by his father who took his family to the movies on a frequent basis. His father viewed movies as not only entertaining but educational as well. His father was a true visionary for he laid the foundation for his youngest son who was destined to become a world-class filmmaker.

Marrying his love of movies with his passion for literature and storytelling, becoming a filmmaker was a natural for Akira. As a child, not only did his passion for movies begin but his love of literature was born. He would walk to school so he could save his tram money to buy books. He would visit the village storytellers and become mesmerized by their imaginative tales. From childhood onward, Akira never lost his love for telling stories, evidenced by the 27 films he ultimately wrote and directed.

Fortunately, his somewhat argumentative and volatile nature was tempered when he met "the best teacher he ever had" in master filmmaker Yamamoto who became his mentor and lifelong friend. Yamamoto taught Akira every technical aspect of filmmaking as well as the importance of treating those who worked for him with respect and dignity. Yamamoto proved to Akira that the filmmaker is able to produce the best results when everyone on his team does his best. Yamamoto would not address anyone, even a seemingly insignificant extra, without giving him the respect of calling him by name.

The patience and tenacity he learned from Yamamoto helped Akira through the tough times. For example, Akira's career as a director was taking off in the midst of World War II. Akira had to tangle with Japanese censors who looked at the films they reviewed through over-zealous and xenophobic lenses. Some of Akira's scripts did not get approval and many of his scenes were cut due to their "American-British" slant or due to perceived obscenity. But Akira persevered through this time. His movie "The Seven Samurai" became one of the classic movies of all time. He enjoyed a long and much-heralded career in a field that he only grew to love more with each movie he made.

Something Like an Autobiography from BookRags. (c)2022 BookRags, Inc. All rights reserved.