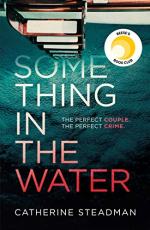 Plot Summary
+Chapters Summary and Analysis
The Grave - How We Met
Interview One - Food Tasting
Interview Two - Things in the Water
The Day After - Flight Paths
The Phone - Customs
Home - Are We Dead Yet?
Holli's Follow-up - Strange Things
Strange People - A Man at the Door
Loose Ends - Something in the Dark
Mark is Coming - What Happened Next
Free Quiz
Characters
Symbols and Symbolism
Settings
Themes and Motifs
Styles
Quotes
Order our Something in the Water Study Guide

Something in the Water Summary & Study Guide

Catherine Steadman
This Study Guide consists of approximately 63 pages of chapter summaries, quotes, character analysis, themes, and more - everything you need to sharpen your knowledge of Something in the Water.

Something in the Water Summary & Study Guide Description

Something in the Water Summary & Study Guide includes comprehensive information and analysis to help you understand the book. This study guide contains the following sections:

This detailed literature summary also contains Quotes and a Free Quiz on Something in the Water by Catherine Steadman.

The following version of this book was used to create the guide: Steadman, Catherine. Something in the Water. Ballantine Books, 2018.

Something in the Water is split into 41 chapters, each marked by the date over the course of five months, spanning from the eighth of July to Christmas Eve. Erin Locke, a British documentary filmmaker, is the novel's first-person narrator.

Erin's story begins as she digs a grave in the forest in Norfolk. She contemplates the difficulty of digging six feet deep, and reveals that the body is her husband’s. She wants to do a good job so she will not get caught, but also struggles with her moral compass. She does not believe she is a bad person, and then addresses the reader, telling them to decide. She resolves to tell her story from the beginning, going back three months to when it all began.

The story truly begins on July eighth, the morning of Erin and her fiancé Mark's anniversary. Mark is a banker, specializing in sovereign debt, and they had been together for years. Their wedding is set for September, and they agree to honeymoon in Bora Bora. Erin is a documentary filmmaker, beginning her first solo project on a documentary following three prison inmates prior to and following their releases.

A few days later, Erin is waiting to conduct her preliminary interview with Eddie Bishop. He is an East End London gangster serving seven years for money laundering. She does her phone call with Eddie, during which he reveals that he has done a lot of background checking on her from inside the prison. A week later, Erin learns Mark’s job discovered his intention to leave, and he is being fired. Erin does her interview with Hollie Byford, a 23 year old woman doing five years for arson in the London riots. Erin and Mark are still wedding planning, a few weeks later. They fight about money, until Erin understands how bad the situation is. Later, Erin does her second in-person interview with Alexa Fuller, a 42 year old woman doing fourteen years for assisting her mother’s suicide.

Erin and Mark are married on September fourth, and then leave for Bora Bora. They go scuba diving in the ocean, and on their way back find a black canvas duffle bag floating in the water. They bring it back to reporting it, but a misunderstanding causes the hotel to return it to them. After a night of drinking, Erin opens the bag. She discovers a bundle of American dollars, a bag of diamonds, a USB flash drive, an iPhone, and a gun. They return to investigate and discover a downed plane. They learn that they were Russian and likely bad people. Erin charges the iPhone during the night and secretly turns it on. She unintentionally reveals that she read the texts to the person on the other end. She tells Mark and he helps her erase all the evidence that they were in the hotel. They decide to keep what they found and return to London early.

They return home in mid-September, successfully smuggling the money, diamonds, USB, and iPhone in their luggage. Erin discovers that she is pregnant, but decides to keep it to herself until they take care of the money. They fly to Switzerland and open an account with the cash. After they return to London again, news of a British couple dying in Bora Bora reaches them. They had met the couple during their honeymoon, and Mark had implicated them to be the couple who had found the bag.

Erin follows up with Holli Byford, only to discover that she fled to Syria, having become radicalized in prison. DCI Andrew Foster is the counterterrorism officer investigating, and Erin is involved due to her documentary. Mark and Erin unsuccessfully attempt to sell the diamonds legally. Alexa is released from prison and Erin follows up with her, accompanying her to her father’s house and her fertility appointment. When visiting the prison prior to her meeting with Eddie Bishop, she is approached by Patrick. He claims to work for the prison, but she belatedly realizes he does not. She panics when she discovers the house door ajar and strange messages on the house phone. During her face-to-face interview with Eddie, he asks her to talk to his daughter. In return, he helps her sell the diamonds.

When Mark goes to New York, Erin turns the phone on. She realizes Mark had secretly listened to a message offering two million euros in exchange for the USB drive. She gets advice and a gun from Eddie, then goes to make the exchange. She sets everything up in the woods in Norfolk, noting the coordinates of the USB in her phone. Patrick breaks in to her room and incapacitates her, taking her phone and gun. She wakes up locked in the bathroom. She breaks out and races to save Mark, who is on his way to find her. In the woods, everything comes together. Erin realizes that Patrick works for Mark, and that Mark was gaslighting her. Erin’s interfering stopped Mark from selling the diamonds and trading the USB on his own. She realizes he also planned to steal the money. Mark is shot and killed by the man who wanted the USB.

The beginning of the novel was this moment: Erin digging her husband’s grave. Eddie gave her advice for how to dispose of the body and report him missing without implicating herself. The novel ends on Christmas Eve, when Erin is staying with Alexa and her father. She intends to not touch the Swiss money until after the baby is born and after Mark is legally declared dead. That night, Erin sees on the news that Holli was involved in a terrorist attack on Oxford Street. She does not know what she could have done. She was only focused on trying to save herself.

More summaries and resources for teaching or studying Something in the Water.

Something in the Water from BookRags. (c)2022 BookRags, Inc. All rights reserved.