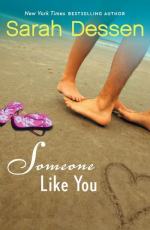 Author Sarah Dessen, a relative newcomer to the world of young adult fiction, published her first novel in 1996.

This novel, That Summer, received a Best Book for Young Adults designation by the American Library Association. Dessen, who was born in Illinois but spent much of her life in North Carolina, credits her mother, who always bought her books instead of clothes for birthdays and Christmas, for introducing her to Southern writers and good books with strong women writers.

During her freshman year at the University of North Carolina, while taking a creative writing class from Southern author Doris Betts, Dessen became serious about the idea of writing fiction professionally and decided, "That's just how I want my life to be."

As a child, Dessen was a voracious reader who read everything she could get her hands on. While Judy Blume's Are You There, God...

Someone Like You from BookRags. (c)2022 BookRags, Inc. All rights reserved.