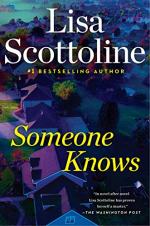 Lisa Scottoline
This Study Guide consists of approximately 48 pages of chapter summaries, quotes, character analysis, themes, and more - everything you need to sharpen your knowledge of Someone Knows.

Someone Knows Summary & Study Guide includes comprehensive information and analysis to help you understand the book. This study guide contains the following sections:

This detailed literature summary also contains Quotes and a Free Quiz on Someone Knows by Lisa Scottoline.

The following version of this book was used to create the guide: Scottoline, Lisa. Someone Knows. G.P. Putnam's Sons, 2019.

Someone Knows follows the aftermath of an adolescent prank gone wrong. The work addresses coming-of-age from the perspective of a generation that is raised in an increasingly materialistic world that merely swims on the surface of human connection. The tenuous and superficial attachments that surround the characters are not enough to cope with the tragic events that unfold in the woods on one fateful night. On the surface, Someone Knows is a mystery novel, yet at is heart it is an examination of what the world is becoming as a result of society’s increasing obsession with affluence and the accumulation of material goods.

The work opens with a Prologue in the second person to remind that all humans are capable of falling into collective thought and action. This opening allows for a deepened sense of accountability as the events surrounding the characters unfold.

Scottoline divides the work into two parts; Part One serves as a coming-of-age work, while Part Two serves as a psychological examination of how adolescence effects adult development. Chapter One is told through the perspective of Allie Garvey who serves as the protagonist. Her family has suffered a grave loss: the death of her 17 year old sister Jill to cystic fibrosis. As a result of her grieving and the emotional turmoil surrounding her sister’ death, Allie is thrown into an adolescent world to which she has previously not been privy: the popular crowd. These adolescents: Sasha Barrows, David Hybrinski, and Juliane Browne, have a secret; they have discovered a gun buried on the grounds of the affluent, pretentious development known as Brandywine Hunt. The neighborhood is rife with social climbers and ambitious corporate power players, and the teens are all posturing for a sense of belonging as well.

As the teens experiment with the gun, shooting it to feel a sense of power, a newcomer enters the group. Kyle Gallagher has relocated to Brandywine Hunt to hide from his father’s heinous acts of sexual abuse on minors. The five characters each carry with them the burdens of impending adulthood and seek refuge and connection within the group. Julian is obsessed with Sasha, Allie pines for David, David is secretly attracted to Kyle, yet makes a play on Allie in hopes that he is wrong about his sexuality. Kyle develops a crush on Sasha, and thus Julian hopes to embarrass him in an effort to retain Sasha’s attention. Julian’s solution is to propose a game of Russian Roulette. All of the participants do not believe the gun is loaded, but they are tragically wrong. Kyle pulls the trigger and is killed instantly. The other four disperse quickly, and at Sasha Julian’s orchestration, they disband and cut off communications with one another. The death is dismissed as a suicide.

Part Two opens up twenty years after Kyle Gallagher’s death, with the onset of David Hybrinski’s death. Allie returns to Brandywine Hunt to attend the funeral of David Hybrinski, which has also been ruled a suicide. Throughout adulthood, Allie has been plagued by her participation in Kyle’s death, as well as her lack of reporting the death accurately to avoid responsibility. She desperately seeks absolution and closure, and begins to dig for information regarding how the gun was loaded despite all parties denying culpability. As further impetus for Allie, Part Two includes the narrative of her devoted husband, Larry Rucci. Larry cares deeply for Allie and desires for the two to have a family. He is disheartened and frustrated when he discovers that Allie has been taking birth control pills despite their consultation with fertility specialists.

Meanwhile Julian has followed his father’s lead and become a crooked real estate developer, determined to acquire as many possessions possible. He reunites with Sasha, and when he rebuffs her, he orchestrates her overdose. Additionally, it is disclosed that he killed David Hybrinski, in an effort to keep the twenty-year old secret from affecting his growing fortune. These killings heighten his hubris and he goes on to kill his father, as well as his henchman, to amass more wealth and power. Allie Garvey is the last pesky detail to which Julian needs to attend. Julian arranges for Allie to meet him at his secluded woodland estate in Pine Barrens, New Jersey. Yet the faithful Larry Rucci is unwilling to let Allie go, despite her reticence and secrets. Allie’s resilience and Larry’s devotion allow for Allie to escape Julian, and foil his plans to kill her.

Although the secret surrounding Kyle’s death is seemingly resolved, there is still no indication as to who put the bullet in the gun. It is not until Chapter 105 that Allie learns that it was actually her father who loaded the gun. In the depth of her grief over Jill, her mother bought the gun, presumably to take her own life. Dr. Garvey hid it in the woods to thwart his wife’s fatal plan. Yet when Linda Garvey is hospitalized for depression, and he witnesses Allie similarly unravelling, he considers taking his own life. He loads the gun, but visions of his surviving daughter prevent him from pulling the trigger.

More summaries and resources for teaching or studying Someone Knows.

Someone Knows from BookRags. (c)2022 BookRags, Inc. All rights reserved.