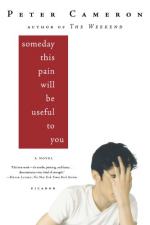 Someday This Pain Will Be Useful to You Summary & Study Guide

Someday This Pain Will Be Useful to You Summary & Study Guide includes comprehensive information and analysis to help you understand the book. This study guide contains the following sections:

This detailed literature summary also contains Topics for Discussion on Someday This Pain Will Be Useful to You by Peter Cameron (writer).

James Sveck works in his mother's art gallery where he spends the majority of his day with too much time on his hands. James' immediate supervisor, John Webster, is an attractive gay man who often uses the computers at work to search for a companion on dating sites. When James stumbles across this website and John's profile, he creates a profile of a fake person who is exactly what John is looking for. It is no surprise when John responds to this fake profile immediately. However, John is terribly hurt and angry when he discovers that his new, perfect mate is really his teenage employee.

Embarrassed by what he has done, James goes to visit the only person he believes understands him - his grandmother. James tells his grandmother that he does not want to go to college because he cannot stand the idea of being surrounded by people his own age. James' grandmother is more diplomatic than his parents and suggests alternatives for his future, but James does not like any of her suggestions. Instead, James dreams of buying a house in the Midwest where he can live out his life in relative seclusion. However, even this dream seems unattainable when James calls a real estate agent in Indiana and dislikes what she has to say.

As James continues to struggle with his desire not to attend school, he begins to reflect on an event that happened to him several months ago. James was invited to attend a prestigious conference in Washington D.C. for high school students who had written outstanding essays on government. James' essay was meant as a joke, but it was taken quite seriously. James did not want to go on the trip, but found himself pushed into it by school administrators and his parents.

On the trip to Washington D.C., James finds that he is expected to share a room with two other boys. James immediately feels out of place and as though he is suffocating without the ability to have time to himself. For this reason, James walks out of a dinner theater event he is attending with some of the other students. James does not intend to leave, but finds himself walking too far from the theater to return safely. James checks into a hotel and spends several days in a local museum. When James is finally caught by the police, he has a breakdown.

James begins to see a therapist after his experiences in Washington D.C., but he finds the therapist annoying and her methods unproductive. However, James is surprised when the therapist asks him about September 11, 2001. James' school was close to the tragedy in New York City and he saw a great deal of the events of that day. The therapists questions suggest that James' current problems stem from his experiences that day.

James visits his grandmother again and is surprised to find her sleeping. James' grandmother tells him that she will be leaving all her belongings to him with the exception of her house when she dies. James is surprised and touched by this. When his grandmother dies months later while James is away at Brown University, he has her things placed in storage for future use.

Someday This Pain Will Be Useful to You from BookRags. (c)2022 BookRags, Inc. All rights reserved.