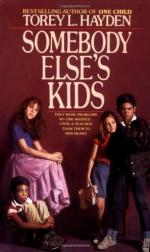 Torey Hayden
This Study Guide consists of approximately 30 pages of chapter summaries, quotes, character analysis, themes, and more - everything you need to sharpen your knowledge of Somebody Else's Kids.

This detailed literature summary also contains Topics for Discussion and a Free Quiz on Somebody Else's Kids by Torey Hayden.

Torey L. Hayden, author of the book, says that she is working as a resource teacher following the federal mandate that special needs children be mainstreamed. She no longer has a class of students who remain with her for the entire day, but spends a few hours each day with small groups of two to five students requiring special help in specific areas. Then she is asked to take Boothe Birney Jackson, a destructive, apparently autistic kindergarten student. She does so, and almost immediately begins to call him "Boo," the nickname given to him by his younger student.

She has Boo all afternoon, but keeps helping the resource students, including a first grader named Lori Sjokheim, the product of abuse. Her biological father had apparently beaten her. Lori and her twin were taken as wards of the state and Mr. and Mrs. Sjokheim began the adoption process. Mrs. Sjokheim then died of cancer and Mr. Sjokheim had to fight to retain the girls as a single man who would be the sole caregiver to two young girls. A head injury had resulted in a bone fragment in her brain, which pierced the part of the brain that controls, very specifically, her ability to recognize letters, numbers and symbols of any kind—though she is a caring child and is as frustrated by her own ability to learn as are those who try to teach her.

Torey feels stretched to the limit by Boo and Lori, constantly seeking ways to engage one while she works intensively with the other. Then she's told she has a new addition to the classroom, a young boy named Thomaso. He is angry and enters the room cursing and making threats. Torey soon learns that Thomaso's mother had died young and that Thomaso had later witnessed his stepmother kill Thomaso's father and brother. He speaks constantly of his father, saying that his father is coming to take him away from the foster care and Torey's class though he can't quite make himself believe that it's true.

With months of the school year left, Torey is now trying to engage three very different children when she's given a fourth student - a twelve-year-old honor student who is pregnant but deeply troubled over her own home life and who believes the child to be her ticket to happiness. As the school year comes to an end, Torey can look back over some small successes and some many failures, but notes that the few successes were worth all the effort she put into the group.

More summaries and resources for teaching or studying Somebody Else's Kids.