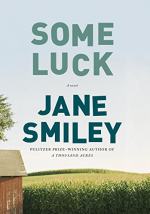 Some Luck Summary & Study Guide includes comprehensive information and analysis to help you understand the book. This study guide contains the following sections:

This detailed literature summary also contains Quotes and a Free Quiz on Some Luck by Jane Smiley.

“Some Luck” by Jane Smiley is the story of the Langford family of Iowa. As the story unfolds, Walter is twenty-four years old with a wife, Rosanna, and baby, Frank. Walter serves in Europe during World War I. When he returns, he becomes enamored by young Rosanna Vogel. She is a raving beauty of German descent with thick blonde hair, lovely features, and a quick smile. Rosanna was raised as a Catholic but she thinks independently and is rebellious. Rosanna is determined to marry Walter. There are elements of the Catholic religion that she cannot sanction such as she does not believe that God would punish an innocent baby who was not baptized by damning it to Hell. The couple marries in a Methodist church. Rosanna remains conflicted about religion throughout her life.

The young family is struggling. Walter has doubts about whether he’ll be successful at crop growing, dairy farming, and to a lesser extent, raising livestock. Walter’s father, Wilmer Langdon, is a successful farmer with a 320-acre farm that is bought and paid for. He criticizes Walter for buying a farm when the market price was at its highest. Wilmer invites the young family to live at his farm. It is tempting, but Walter is independent and proud. He doesn’t want to be a charity case.

Walter is a hard worker and dedicated to making the farm profitable even through the years and challenges of the Great Depression and the Great Drought. Both of these events hit the farmers hard. But Walter perseveres so that he can support his growing family. Rosanna has a second son, Joe, who is not big and strong like his older brother, Frank. Rosanna struggles with her private thoughts about Joe – he’s weak and has every bad feature from both sides of the family. She has guilt and shame for her feelings about Joe because Jesus loved all children the same. When she has Mary Elizabeth, Rosanna feels that she has a gift from heaven. When the little girl is only three, she dies from a freak accident. Rosanna is overwhelmed by her grief and has to fight the shame and guilt she feels about her daughter’s death.

A distance grows between Walter and Rosanna after Mary Elizabeth’s death. Their focus is not the same. Rosanna is depressed and looks to the Lord to free her of her misery. Walter doesn’t think deeply about much more than his farm. Times get so rough at one point that Walter considers suicide. The family never can really relax because they barely survive. Rosanna has three more children. Rosanna was alone when she went into labor with the second youngest child, Henry, and delivered him herself.

The lives of the Langford children take different paths. Despite their time away or the distance between them, they remain strongly and forever connected to the Langdon farm and to Rosanna and Walter.