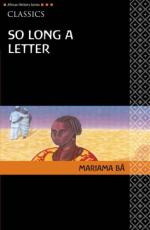 Mariama Ba
This Study Guide consists of approximately 24 pages of chapter summaries, quotes, character analysis, themes, and more - everything you need to sharpen your knowledge of So Long a Letter.

So Long a Letter Summary & Study Guide includes comprehensive information and analysis to help you understand the book. This study guide contains the following sections:

This detailed literature summary also contains Topics for Discussion on So Long a Letter by Mariama Ba.

With this work of fiction, Senegalese writer Mariama Bâ explores the inequalities between men and women in Senegal, Islam, and African society. Bâ creates a premise of a fictional letter from Ramatoulaye, a schoolteacher in Senegal, to her good friend Aissatou, now in America. Ramatoulaye, a recent widow, is sequestered in mourning for four months and 10 ten days, as is the custom when a woman’s husband dies. During this time, she reminisces about hers and Aissatou’s lives as students, then later adapting to their roles as wives. She pensively examines the disintegration of both their marriages using introspection and striving to look backward with equanimity.

Ramatoulaye and Aissatou grew into adulthood at a time when women’s liberation was gaining momentum across the globe. It was also a time of newly-acquired independence in Senegal and the struggle to find a fresh societal model in a modern world. Ramatoulaye observed: “It was the privilege of our generation to be the link between two periods in our history, one of domination, the other of independence.”

The two friends became teachers, contributing to the new landscape of education for girls and boys, rich and poor alike. They were cutting edge feminists and the men they married were modern in their views. Mawdo Bâ, suitor to Aissatou and a caring doctor, married Aissatou, a goldsmith’s daughter, despite Mawdo’s noble heritage. Ramatoulaye did not renounce her religion or customs and she still practiced many cultural traditions, yet she moved forward as a working mother and wife. Her husband Modou Fall wanted to help shape the country’s future, and his work as a lawyer representing trade unions had an impact on governmental decisions.

Trouble befell the marriages that were consummated over twenty years earlier. First, Aissatou’s husband wed a second wife but hoped to continue to live primarily with his first wife. Aissatou would not settle for this and divorced him. Three years later, when Modou Fall took a second wife, he abandoned Ramatoulaye and her twelve children. Ramatoulaye decided to stay legally married, though Modou never set foot in their house again.

Five years after Modou’s betrayal, he had a heart attack and his friend Mawdo was unable to revive him. The mourning and burial of Modou was carried out according to tradition, and Ramatoulaye and her co-wife mourned together in one house as people visited to pay their respects. Ramatoulaye was then house-bound for the rest of her mourning period. It was during this time she found a way to make peace with the past and to embrace the future.

So Long a Letter from BookRags. (c)2022 BookRags, Inc. All rights reserved.