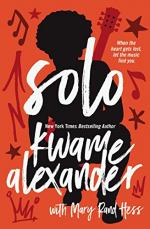 The Eddie Van Halen Frankenstrat guitar represents a bridge between heaven and earth that connects Sunny and Blade. Though Rutherford gifts Blade the custom guitar for his birthday and claims that it was intended for an African king, Blade values the guitar because he hears his deceased mother laughing when he strums its strings. When Blade later destroys the guitar after discovering that Chapel cheated on him, he symbolically breaks the last physical bond between him and his mother. This act suggests that Blade feels furious because Rutherford complicated his relationship with Chapel and betrayed because Sunny failed to sufficiently protect him from disloyalty.

Guitars symbolize confidants for the Morrisons. Every Morrison who appears in Solo is a musician and writes music using guitars. Consequently, Blade personifies these instruments by describing them as “the keepers/of our secrets/and our prayers...