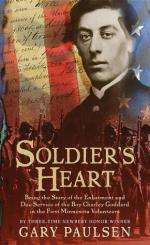 Gary Paulsen
This Study Guide consists of approximately 40 pages of chapter summaries, quotes, character analysis, themes, and more - everything you need to sharpen your knowledge of Soldier's Heart.

In Winona, Minnesota, and most other towns in Minnesota, town meetings are held to discuss and promote the Volunteer Regiment of Minnesota. These have a circus-like atmosphere with drums and flags. This is how Charley educates himself about the ways of getting into the army even though he is underage.

Fort Snelling is the closest fort to Winona, and Charley walks there from home to be able to sneak into the army without anyone knowing his real age. The soldiers are drilled continually in the hot sun. They also learn to shoot, but because there is a shortage of ammunition, they generally practice without bullets.

Charley boards a train after two steamboat rides and initial training at Fort Snelling. There are leather seats, fabulous food and luxurious appointments, and Charley hasn't ever seen anything so wonderful. People wave flags and blow kisses...

More summaries and resources for teaching or studying Soldier's Heart.