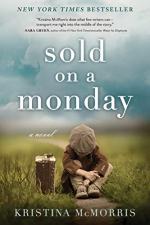 Kristina McMorris
This Study Guide consists of approximately 64 pages of chapter summaries, quotes, character analysis, themes, and more - everything you need to sharpen your knowledge of Sold on a Monday.

Sold on a Monday Summary & Study Guide includes comprehensive information and analysis to help you understand the book. This study guide contains the following sections:

This detailed literature summary also contains Quotes and a Free Quiz on Sold on a Monday by Kristina McMorris.

The following version of this book was used to create the guide: McMorris, Kristina. Sold on a Monday. Sourcebooks, Inc., 2018.

McMorris’s novel is broken up into forty-two chapters that periodically shift their perspective in order to follow one of two main characters throughout the narrative. It follows Ellis Reed and Lily Palmer’s trek through New Jersey to reunite two children with their mother, an accidental separation resulting from an unfortunate series of events.

Ellis Reed is an ambitious reporter working for the Society section of the Philadelphia Examiner when he comes across two boys sitting on a farmhouse porch one Sunday afternoon. An avid scenery photographer on the side, Ellis takes their photo before realizing that they are sitting next to a sign reading “2 Children for Sale” (6). The heartbreaking discovery and the children’s innocent nature lead Ellis to want to do something to help them, but he is not sure that there is anything within his power that he can do.

Lily Palmer comes across the photograph drying in the darkroom of the newspaper office. As a mother, her heart goes out to the two victims of unfortunate circumstances. She brings the photo to the newspaper’s chief, who offers Ellis the opportunity to write a feature accompanying it. Ellis jumps on the opportunity, one that he knows carries the possibility to advance his career into the hard-hitting role that he has always dreamt of.

Upon learning that there has been an accident with the photograph, as well as the negatives, Ellis returns to Laurel Township, where he took the original photo, to try to replicate it. Learning that the boys and their family have had a stroke of luck and moved away, Ellis is elated but left without a photograph to accompany his article. In an act of desperation, he stages a second photograph featuring two children living across the street.

Ellis discovers, after having moved from Pennsylvania to New York in order to pursue a better job opportunity as a result of his newfound fame, that his photograph led to the selling of the Dillard children, whom it featured. Having engaged Lily on his quest to find out what happened, they learn that Geraldine Dillard had been misdiagnosed with tuberculosis and believed that she was dying. For this reason, when Alfred Millstone, a wealthy banker, comes to see Geraldine about purchasing her children, she allows it and gives them to him.

Alfred and his wife, Sylvia, seem to have a dark reason for wanting to purchase the children. Ruby Dillard possesses a striking resemblance to their own daughter, Victoria, who they lost in a car accident a few years prior. Sylvia, in her trauma, has tried to replace Victoria with Ruby, right down to the same clothing and food preferences, in a bid to heal from the tragedy. Meanwhile, she has sent Calvin to an orphanage because she didn’t care for his inability to adapt to his new lifestyle.

Lily and Ellis embark upon a mission to find both children and return them to their rightful mother. Along the way, they are caught in a series of circumstances that work to impede their goal, including a trip to jail and an impromptu meeting with Sylvia’s brother and member of the Mob, Max Trevino.

More summaries and resources for teaching or studying Sold on a Monday.

Sold on a Monday from BookRags. (c)2022 BookRags, Inc. All rights reserved.