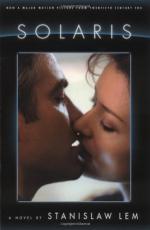 Stanisław Lem
This Study Guide consists of approximately 35 pages of chapter summaries, quotes, character analysis, themes, and more - everything you need to sharpen your knowledge of Solaris.

This detailed literature summary also contains Topics for Discussion and a Free Quiz on Solaris by Stanisław Lem.

Solaris is set in a future time of interplanetary travel. Kris Kelvin is a Solarist, a scientist who studies the planet Solaris, and his specialty is psychology. Kelvin travels to Solaris only to find that the planet's mysterious ocean has begun bringing to life precise duplicates of figures from the deepest recesses of the scientists' minds.

As the novel begins, Kelvin arrives at Solaris Station to study the mysterious and possibly sentient vast ocean that covers the planet Solaris. He finds the space station in disarray and the scientists on the verge of madness. Mysterious creatures haunt the spaceship. They look human, but they have superhuman abilities. Soon, Kelvin is visited by his own "ghost", an exact duplicate of Rheya, the girl he once loved, who killed herself when he walked out on her.

Kelvin is at first horrified, and he begins to realize that for some unknown reason, through some unknown mechanism, Solaris's ocean is creating these visitors. Rheya herself does not know that she is not real. After ejecting one version of Rheya into space, Kelvin resolves to stay and live with this imitation of Rheya—a woman he still deeply loves.

When Rheya finds out that she is only a duplicate of the "real" Rheya, and not truly human, she tries to kill herself, but her body regenerates. The other scientists want to find a way to permanently destroy the visitors, who differ from human beings at the subatomic level. Kelvin secretly vows to try to save Rheya at all costs.

Ultimately, the scientists decide to beam X-rays carrying a recording of the electrical impulses in Kelvin's brain into the ocean. At first, there does not seem to be any reaction, but Kelvin begins to experience weird and indescribable dreams. After a couple of weeks, there is a strange storm in the ocean.

Kelvin and Rheya live together in a fantasy world, planning their return to Earth and their life together, but they both know in their hearts that it is only a dream. Secretly, Rheya plots with Snow to arrange her suicide. Sartorius is working on a machine to disintegrate the neutrino field that holds the visitors together. After it is completed, Rheya drugs Kelvin and kills herself.

Since the strange ocean storm, the visitors have stopped returning. Rheya will not come back. Snow sees the experience as opening a door to communication with the ocean. They prepare a report for Earth.

Kelvin is sunk in depression, and Snow is afraid that he will kill himself. Kelvin plans to return to Earth, but slowly his ideas change. He goes out onto the ocean by himself, and he communes with the giant creature. He realizes that he will stay on the space station and study Solaris's ocean because it is the only way he can find meaning in his life.