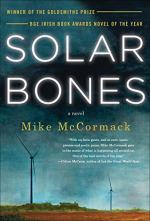 McCormack, Mike
This Study Guide consists of approximately 42 pages of chapter summaries, quotes, character analysis, themes, and more - everything you need to sharpen your knowledge of Solar Bones.

Solar Bones takes place on All Souls’ Day in Louisburg, Ireland. Its narrator, Marcus Conway, revisits his old home as a ghost after his untimely death as a middle-aged man. For most of the narration, Conway does not realize he is a ghost, and therefore waits for his family to come home so they can have dinner together. As Conway waits, he reflects on the actions of his life, his marriage, his children’s lives, the country’s politics, and his own religion. These reflections are woven together in a single sentence, paralleling how Conway articulates the action of his life in a single day.

Because the novel is composed of Conway’s own thoughts, the action of the novel does not take place in chronological sequence: instead, the reader learns events out of order, depending on how Conway remembers them. However, once the novel has been read as a whole, the reader understands that Conway has articulated every phase in the human life. Conway begins by remembering his childhood and his relationship with his father. Conway considers his father a great man, who adhered to the tradition of his ancestors and tried to bring order into the world. Conway’s narration relates how Conway’s father descended into madness after the death of his wife, eventually resulting in his own death, thus tracing the rise and fall of Conway’s hero.

Conway’s narration goes on to reveal Conway’s character as a young man and his relationship with his wife, Mairead. Conway remembers that as a young man, he entered the seminary, intending to become a priest. After a year or so, however, Conway decided to leave the priesthood, for he was unable to feel the presence of God. Only after he left the seminary did Conway meet Mairead, his wife. Conway reflects on the beginning of their marriage, in which Mairead conceived their first child at the same time that Conway was unfaithful to her. Conway’s infidelity caused a rift between the couple, for Mairead decided to leave him. However, because she was pregnant and wanted her child to have a full life, Mairead returned to Conway, and the couple truly began their life together.

Conway then relates the lives of his two children, Agnes and Darragh. Agnes is an artist, whom Conway thinks of as self-contained and distant from the world. In the novel, Agnes’ art makes her a cultural icon. At the novel’s beginning, Conway learns that Agnes had used her own blood to create her artwork; this act of self-mutilation gave rise to Agnes’ popularity, making her a success in the city. For the entire course of the novel, Darragh is in Australia, learning about the family’s events from a distance.

In addition to reflecting about his childhood, early marriage, and children, Conway reflects on the time immediately preceding his death. Before he died, Mairead fell ill to a virus sweeping through the county of Louisburg. In Conway’s narration, this viral-infection raises questions of politics, religion, and engineering, forcing Conway to consider who is responsible for the horrible illness that was consuming his wife and the city.

McCormack’s novel ends with Conway’s ghost realizing that he is, in fact, a ghost. Although this epiphany is tragic, for Conway realizes that he will never see his family again, the novel ends on a hopeful note, for Conway’s last words are “keep going,” implying that even after death, the mind and the will of the individual persists.

More summaries and resources for teaching or studying Solar Bones.