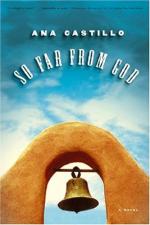 So Far from God Historical Context

Ana Castillo
This Study Guide consists of approximately 107 pages of chapter summaries, quotes, character analysis, themes, and more - everything you need to sharpen your knowledge of So Far from God.

The Chicano/a Movement was born in the wine-growing region of California in the early 1970s when Cesar Chavez organized the mainly Hispanic migrant farmworkers into an effective, vocal labor union. Within a few years authors, poets, actors, and politicians were demonstrating and demanding equal rights for Americans of Hispanic descent in terms of language recognition, cultural integrity, and political power. As the movement grew, many women within the movement began to feel left out or misunderstood. Writers like Sandra Cisneros, Josaphina Lopez, and Gloria Anzaldua argued for a pro-female wing to the movement, saying that the concerns of Hispanic women were being ignored by the traditional macho attitude of the male leaders. Ana Castillo enlivened the debate by casting doubts on both the traditional definitions of womanhood and the newer "liberated" Hispanic woman put forward by the Feminist Chicana Movement.

More summaries and resources for teaching or studying So Far from God.

So Far from God from Gale. ©2005-2006 Thomson Gale, a part of the Thomson Corporation. All rights reserved.