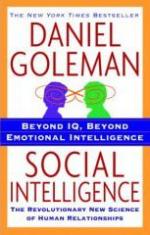 Daniel Goleman
This Study Guide consists of approximately 29 pages of chapter summaries, quotes, character analysis, themes, and more - everything you need to sharpen your knowledge of Social Intelligence.

In the prologue of the book, Goleman tells the story of Lieutenant Colonel Christopher Hughes and his platoon counteracting a potentially hostile situation by utilizing social intelligence.

Goleman currently resides in New York City. Several of his anecdotes, including almost all of his personal ones, take place in this famous metropolis.

The prestigious Boston university is where Goleman received his PHD. He has several anecdotes, both his own and others, that revolve around the school.

The Portland university is where John Crabbe, Goleman's childhood best friend, works as a behavioral geneticist.

C557BL/6J is a DNA strain found it mice that makes them crave alcohol. John Crabbe does studies on this specific strain.

"Chicken Run" is an animated film that Goleman watches with his two year old granddaughter. He uses her reaction...

More summaries and resources for teaching or studying Social Intelligence: The New Science of Human Relationships.