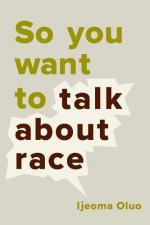 So You Want to Talk About Race Summary & Study Guide

Ijeoma Oluo
This Study Guide consists of approximately 46 pages of chapter summaries, quotes, character analysis, themes, and more - everything you need to sharpen your knowledge of So You Want to Talk About Race.

So You Want to Talk About Race Summary & Study Guide Description

So You Want to Talk About Race Summary & Study Guide includes comprehensive information and analysis to help you understand the book. This study guide contains the following sections:

This detailed literature summary also contains Topics for Discussion on So You Want to Talk About Race by Ijeoma Oluo.

The following version of the book was used to create this study guide: Oluo, Ijeoma. So You Want to Talk About Race. Seal Press, 2018. First Edition.

Race has always been one of the most defining forces in Ijeoma Oluo's life. Now, after years of not talking about it, she is speaking out and writing extensively about racial justice issues. This book is a starting point for those who want to have more and better conversations about race and racial injustice. Its topics address both questions that Oluo is often asked in her day-to-day life, as well as topics she wishes she got more questions about.

In the first chapter, Oluo discusses the connection between economics, poverty, and race, noting that people of color are poor for different reasons than white people. She addresses the central premise of White Supremacist society - that some will get more because others exist to get less - and challenges this idea. She also outlines three basic rules to know whether or not an issue at hand is about race. Next, Oluo defines racism with an emphasis on systemic racism, noting the difference between fighting individuals with hate in their hearts and an entire system of social and institutional structures which are founded on and upheld by White Supremacist ideas. Oluo notes that conversations about race are necessary, though white people will inevitably make mistakes, no matter how well-intentioned they may be. She encourages readers to embrace the discomfort of these conversations and offers tips for how they can go more smoothly.

Oluo writes about the concept of checking one's privilege, noting that we are all both advantaged and disadvantaged in different ways. She encourages readers to examine their privilege and figure out where in their lives they have been given more advantages and opportunities, noting that these are the areas in which they have the most power to make changes. She then discusses the concept of intersectionality as an important fact of all social justice movements. Intersectionality takes into consideration the multi-faceted aspects of a person's identity so that diverse and specific needs can be included in social justice efforts.

The next topic is police brutality. Oluo writes about implicit bias and systemic racism in the police force, as well as the negative historical relationship between people of color and the police, which persists today. Chapter Seven is about affirmative action as a method to redress imbalances of power and opportunity in schools and workplaces. Oluo counters arguments against affirmative action and demonstrates how it can be effective in increasing minority representation in schools and businesses. She then writes about the school-to-prison pipeline and how systemic racism and implicit bias of school administrators and teachers lead them to criminalize black and brown children.

Oluo writes about the power of language and the question of word reclamation, arguing that words have the power to do damage and cause hurt. She writes about the difference between so-called cultural appreciation and cultural appropriation, in which minority cultures are exploited for the benefit of the dominant culture. In Chapter Eleven, Oluo discusses the body autonomy of people of color, focusing on how her hair is often an unwanted topic of conversation. Chapter Twelve defines microaggressions as small but cumulative daily indignities and insults perpetrated against marginalized or oppressed people, and explains why microaggressions are, in fact, hurtful acts of racism. Oluo then writes about her children and their social justice efforts, encouraging adults to let the next generation take the lead in our efforts to make the world a better place.

Oluo explains the model minority myth which fetishizes and stereotypes Asian American as the "ideal" minority population. She explains why this myth is racist and hurtful. She then discusses the issue of tone policing. Tone policing is when someone (usually the privileged person) shifts the conversation away from the issue of oppression at hand and instead focuses on how that issue is being discussed. In the penultimate chapter, Oluo addresses the fact that no one wants to be called racist or called out for racist actions. She offers advice to white readers on what to do and how to behave if they find themselves in this situation, so that they may do better in the future. Finally, Oluo writes about the importance of taking action in addition to talking about race. She encourages readers to find ways to take action against racial injustice and offers examples of how they can get started in making a difference.

More summaries and resources for teaching or studying So You Want to Talk About Race.

So You Want to Talk About Race from BookRags. (c)2022 BookRags, Inc. All rights reserved.