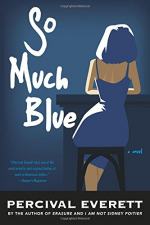 So Much Blue: A Novel Summary & Study Guide

Everett, Percival
This Study Guide consists of approximately 104 pages of chapter summaries, quotes, character analysis, themes, and more - everything you need to sharpen your knowledge of So Much Blue.

So Much Blue: A Novel Summary & Study Guide Description

So Much Blue: A Novel Summary & Study Guide includes comprehensive information and analysis to help you understand the book. This study guide contains the following sections:

This detailed literature summary also contains Quotes and a Free Quiz on So Much Blue: A Novel by Everett, Percival .

The following version of this book was used to create this study guide: Everett, Percival. So Much Blue: A Novel. Graywolf Press, 2017.

The novel was told from the first-person perspective of its protagonist, a fifty-seven-year-old artist named Kevin Pace. Kevin divided his narrative into three interwoven stories, told in alternating chapters labeled ‘House,’ ‘1979’ and ‘Paris.’

In the first story, told in the chapters labeled ‘House,’ Kevin had been working for approximately nine years on a large painting which he allowed no one to see. He and his wife, Linda, lived in a house in New England with their two teenage children, April and Will. Although Kevin was close with his children when they were young, he largely stopped interacting with them when they grew older. He also struggled with periods of alcoholism throughout his children’s lives.

When April was sixteen, she confessed to Kevin that she was pregnant and demanded he promise not to tell Linda. In the das after April’s confession, Kevin had multiple conflicted conversations with his best friend Richard about whether or not to uphold his promise. He also went to a local store called Frazars’ Feedstore, where he purchased a fly-killing machine that he planned to use to destroy his private painting. The store’s owner and his son, Jason, came to Kevin’s house to deliver the machine: Kevin became convinced that Jason was the father of April’s baby, but April later told him that he had been wrong, although she refused to divulge the real father’s identity. April grew increasingly hostile towards her mother and began showing signs of fatigue and nausea.

After several days, Kevin decided to tell Linda about April’s pregnancy, but before he could reveal the secret Will entered their bedroom and told them that April was bleeding. Kevin and Linda ran to the bathroom, where they determined that April was having a miscarriage. Kevin went downstairs and Linda helped April. Linda later asked him what other secrets he had been hiding from her if he did not tell her about April’s pregnancy: he told her he had none.

A second story is told in chapters labeled ‘1979,’ the year of a violent civil war in El Salvador. That year, Kevin accompanied his best friend Richard, a graduate student at the same university as Kevin, to El Salvador to find Richard’s brother, a drug addict named Tad. At the American embassy in El Salvador, an anonymous man directed Richard and Kevin to contact a man called the Bummer. They did so, and the Bummer drove them from the city to a mountain: they stopped at both a cantina and an empty meadow, but found no one who knew Tad. They traveled to a small village, where they saw a girl who had been murdered by soldiers. Her father and brother stood nearby, crying, as Richard and Kevin buried her body.

The Bummer, Richard, and Kevin returned to the cantina, where they met a man named Carlos, who took photographs of dead people and sold them to their relatives for a living. The Bummer drove Richard and Kevin back to their hotel; he returned the following day, and the three went to a bar where a man gave them Tad’s location in exchange for money. Richard, Kevin, the Bummer and Carlos exited the city, which was becoming increasingly chaotic and overrun by soldiers and protestors, and drove to a lake, where they saw Tad. They ran with him back through the jungle as drug runners began shooting at them, killing the Bummer.

Kevin, Richard, Carlos, and Tad returned to the car, and were forced to drive back to the hotel because Richard had left his passport there. Once they reached the city, Kevin – who had the Bummer’s handgun – threatened Carlos with it and forced him to leave the car. Riots and traffic crowded the streets, so Richard and Tad left to the hotel on foot while Kevin waited in the car. He decided to burn Carlos’ book of photographs in a nearby burning trash can. Once he left the car, he was shot at by a policeman: he reflexively shot back with the Bummer’s gun, killing the man.

Kevin returned to the car and drove towards the hotel, where he picked up Richard and Tad. They drove to the airport and boarded a plane to Los Angeles: Kevin confessed to Richard about the murder. Kevin was interrogated at the airport but allowed to leave.

After Kevin returned home, he became depressed and descended into alcoholism, although his paintings became popular. Originally isolating himself from both Linda and Richard, he eventually began eating meals with Linda and establishing a routine with her. He proposed to Linda out of a desire to feel normal and whole again, although he did not love her. They were married for several years before they had children: Kevin was reluctant to conceive but eventually conceded. The family lived in a nonfunctional home designed by an artist in Rhode Island, then moved to a farmhouse, and finally moved permanently to Martha’s Vineyard.

A third story, told in chapters labeled ‘Paris,’ is woven into the narrative. This story is set over ten years before Kevin began his painting, when he and Linda went on a trip to Paris. While Linda was visiting a friend, Kevin attended an art lecture where he accidentally brushed hands with a young woman named Victoire. After the lecture, they drank coffee together: the next day, they went to a restaurant, then to Victoire’s flat, where they kissed. Kevin told Linda that he would remain in Paris for two more weeks at the request of his gallerist, Etienne.

The affair progressed over the course of the two weeks. Victoire told Kevin that she loved him and introduced him to her mother, who was aware that Kevin was married. Linda suspected that Kevin was drinking alcohol again, but did not suspect the affair. Richard visited Kevin’s art gallery opening and Kevin confessed the affair to him. Later that night, he told Victoire about burying the child and killing the man in El Salvador; Victoire told him that she had attempted to kill herself. Victoire returned to Kevin’s hotel the night before he left, telling him that she loved him although both knew they would never see each other again.

After April’s miscarriage, Kevin returned to El Salvador, where he met with the father of the girl he had buried and visited her grave. When he returned home, he brought Linda to the barn where he was creating his private painting and showed it to her.

More summaries and resources for teaching or studying So Much Blue: A Novel .

So Much Blue: A Novel from BookRags. (c)2022 BookRags, Inc. All rights reserved.