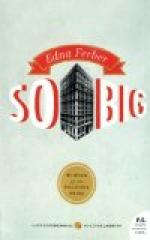 Get So Big from Amazon.com
View the Study Pack
Study Guide
Order our So Big Study Guide

Edna Ferber
This Study Guide consists of approximately 53 pages of chapter summaries, quotes, character analysis, themes, and more - everything you need to sharpen your knowledge of So Big.

So Big Summary & Study Guide includes comprehensive information and analysis to help you understand the book. This study guide contains the following sections:

This detailed literature summary also contains Quotes and a Free Quiz on So Big by Edna Ferber.

Selina Peake grows up as the only child of a gambler, Simeon Peake. Her father sends her to live with spinster aunts for a short time but realizes how unhappy Selina is and reclaims her to live with him. When Simeon is doing well, they live in luxury. When he has a run of bad luck, they live frugally, though Simeon always manages to pay for Selina's tuition at a finishing school. Selina is at the boarding house where they are staying when she learns that her father has been shot and killed when an angry woman meant to shoot someone else.

Selina is left alone with only a small nest egg her father saved for her. She becomes a school teacher in High Prairie a rural community made up mainly of Dutch families outside Chicago. Klaas Pool picks her up and takes her to his house, where she'll be living for the duration of the school year. On the way to the Pool farm, Selina discovers that the fall crops are beautiful. Once she arrives, she discovers that the life of a truck farmer is difficult with long hours and little reward. Selina plans to spend a couple of years teaching in High Prairie before returning to the city to take up a teaching job there. Instead, she is soon married to a local farmer named Pervus DeJong.

Pervus has a 25-acre truck farm with poor land and harsh conditions, including on tract that's prone to flooding. Selina enters her marriage with plans to make her home beautiful and to never allow herself to become the work-hardened woman typical of the region. She soon realizes that she can't make either of those plans come to fruition. She gives birth to a son that they name Dirk and then to a daughter who dies. Within a few years, Selina is working in the fields alongside Pervus and his one hired helper. She has ideas for the land but the couple has neither the time nor the money to make these ideas into reality.

Then Pervus dies, leaving Selina to figure out a way to make her truck farm pay off enough to provide for Dirk. She's determined that he will have the opportunity to do whatever he wants with his life and that he won't ever have to toil in the dirt for a living. She soon discovers that she's going to have to take charge of the farm or starve. She goes into Chicago for a market day and manages to sell only a fraction of the produce she has available. She hits a local grocer who buys some more of her produce but then happens to meet her best friend from her childhood, Julie Hempel, who is now married.

Julie is horrified at Selina's situation and her father, a wealthy self-made man, loans Selina money to get some of her ideas in place. The farm is soon doing well enough to send Dirk to college and then to architecture school. Dirk finds that he's making very little as an architecture and moves into the banking business where he makes a great deal of money. Selina wants Dirk to see the beauty in the world around him and to make something beautiful for himself, but Dirk wants only to make money in the financial sector.

Dirk is involved with Julie's daughter, Paula, though Paula is married to a wealthy older man. Paula pushes Dirk to become more successful and they spend a great deal of time together. Then Dirk meets a young artist named Dallas O'Mara and becomes fascinated with her and with her world. He suddenly sees Paula for the controlling woman that she is. He fails to see that Dallas and his mother share a common view of the world but begins to see the world through Dallas's eyes. She is quickly the most important person in his life and he wants to be equally important to her, but she has plans for herself that include leaving the country. The story comes to an end with Dirk in agony over his unrequited love but coming to discover that there's more to life than making money.

More summaries and resources for teaching or studying So Big.

So Big from BookRags. (c)2022 BookRags, Inc. All rights reserved.