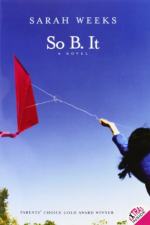 Get So B. It from Amazon.com
View the Study Pack
Study Guide
Order our So B. It Study Guide

Plot Summary
+Chapters Summary and Analysis
Heidi
Dette - Hello
Soof
Shh, Tea, Out
More and Back Soon
Go, Good, AGain, and Blue
Pretty, Now, Hot, Kiss, Bad
No and Uh-Oh
Ow and Done
So Be It
Free Quiz
Characters
Symbols and Symbolism
Settings
Themes and Motifs
Styles
Quotes
Order our So B. It Study Guide

So B. It Summary & Study Guide

Sarah Weeks
This Study Guide consists of approximately 42 pages of chapter summaries, quotes, character analysis, themes, and more - everything you need to sharpen your knowledge of So B. It.

So B. It Summary & Study Guide Description

So B. It Summary & Study Guide includes comprehensive information and analysis to help you understand the book. This study guide contains the following sections:

This detailed literature summary also contains Quotes and a Free Quiz on So B. It by Sarah Weeks.

So B. It is a coming of age story about 12-year-old Heidi whose mother has a mental disability. Their agoraphobic neighbor Bernadette found Heidi’s mother at her door with an infant in her arms twelve years ago and has taken care of them ever since. Since Heidi’s mother can only say a few words, the only information Bernadette has — and consequently Heidi has— is that Heidi’s name is Heidi and her mother’s name is So B. It. Longing to discover her own history and fueled by a roll of old film she discovered in the back of a kitchen drawer, Heidi sets off on a quest to find someone who knew her mother before Bernadette.

The beginning of the book discusses the logistics of their lives. How do a 12-year-old girl, a mentally disabled mother, and an agoraphobic woman survive? Fortunately there is a door between Bernadette and Heidi’s apartment, so Bernadette is able to go to their home without leaving her own. Financially, Bernadette has a small inheritance from her father, Heidi and her mother’s rent and utility bills are magically paid for. Heidi also has what they call a “lucky streak”. Sometimes she uses this luck on the slot machine at the laundromat to make some much needed money to supplement their income.

As she becomes older, Heidi is besot with curiosity about her history. Bernadette does not have any information and discourages Heidi's curiosity. However, Heidi’s curiosity only grows. Of special interest to her is what her mother’s made-up word “soof” means. One day, Heidi finds a roll of old film in the back of a kitchen drawer. When she develops it, she finds pictures of what looks to be a holiday party at a place called Hilltop Home, Liberty, New York. There are pictures of a young So B. It (possibly pregnant), a woman that seems to be her mother, a young man, and a thin Santa.

When repeated phone calls and letters to Hilltop Home are ignored, Heidi decides she must go there herself to get answers. Heidi meets interesting people on her bus ride. She also discovers much about herself. Heidi arrives at Liberty safely but penniless (thanks to a pickpocket). She uses her wits and her lucky streak to arrive at Hilltop Home.

At Hilltop Home, Heidi is met with hostility from the director, but is taken in by one of the caretakers, Ruby, and her husband Roy. They take Heidi home, feed her, and give her a bed to sleep in. The next day, Heidi is anxious to return to Hilltop and get answers, but is not taken back to Hilltop until the afternoon. Right as Roy appears to take her, Bernadette calls and tells Heidi to come home. However, Heidi is so focused on her goal at hand that she ignores Bernadette.

At Hilltop, she discovers that her mother had indeed been a resident at Hilltop Home for a little over a year. Her name is Sophia Lynne DeMuth and Heidi’s grandmother’s name was Diane Demuth. Elliot, the mentally disabled son of the director of Hilltop Home was Sophia's best friend. He is also Heidi's biological father, which makes Thurman Hill her grandfather.

After Sophia becomes pregnant by Elliot, arrangements were made for Diane, Sophia, and Heidi to be supported for by Thurman Hill somewhere far from Hilltop to protect the honor of Hilltop. This explains how their rent and utility were always mysteriously paid. Diane Demuth was killed by a truck the day that Bernadette found Sophia and Heidi at her door.

Elliot calls Sophia “soof” and Sophia calls herself “So B. It.” Elliot and Sophia loved each other deeply, and to the surprise and distress of their parents, they never forgot each other or stopped missing each other. Heidi realizes that “soof” was Sophia’s word for “love”.

As Heidi is gaining this knowledge, Sophia dies from the headaches she has long been fighting. Her body is brought to Hilltop to be buried. After the funeral Heidi returns to live with Bernadette but maintains a relationship with Ruby and Roy. A future relationship with her biological father and grandfather may or may not be viable. Also, Heidi enrolls in school once she returns to Reno. The book ends with her mourning all that she still doesn’t know and won’t know —but ultimately realizing the value of all she does have.

More summaries and resources for teaching or studying So B. It.