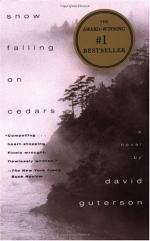 Related Topics
East of the Mountains

David Guterson
This Study Guide consists of approximately 60 pages of chapter summaries, quotes, character analysis, themes, and more - everything you need to sharpen your knowledge of Snow Falling on Cedars.

Guterson's The Country Ahead of Us, the Country Behind (1989) is a collection of ten short stories about middle-class suburbia. This collection was Guterson's first published book, and it received accolades from critics.

Joy Kowaga's award-winning Obasan (1994) is based on the author's personal experiences as a Japanese-Canadian girl during World War II. The story is about a young girl named Naomi who is relocated with her family during the war. As an adult, Naomi struggles to make peace with the injustices endured in her past.

Harper Lee's classic To Kill a Mockingbird (1960) is the story of a trial held in a small town in the South. Told from the point of view of a young girl named Scout, this novel explores themes of prejudice, justice, and small-town dynamics.

Snow Falling on Cedars from Gale. ©2005-2006 Thomson Gale, a part of the Thomson Corporation. All rights reserved.