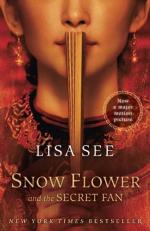 Lisa See
This Study Guide consists of approximately 47 pages of chapter summaries, quotes, character analysis, themes, and more - everything you need to sharpen your knowledge of Snow Flower and the Secret Fan.

This detailed literature summary also contains Topics for Discussion and a Free Quiz on Snow Flower and the Secret Fan by Lisa See.

"Snow Flower and the Secret Fan" is a lovely, delicate story of two women in nineteenth-century China, who pledge themselves to be soul-mates for life at the young age of seven. Although the truth is stretched to accommodate the relationship, the laotongs are supposed to have eight "characters" that match; the girls were born in the same month and have their feet bound at the same age, but it turns out that there are differences between them they only discover as adults. Binding their lives is their continuous learning of women's writing called "nu shu," which is a secret, minimalist variation of "men's" writing, and one which only females can know. A silk fan passed back and forth between Snow Flower and Lily Wu, two "old sames," is where they recorded, in nu shu, the major events and turning points of their lives.

The culture of Hunan during this period of history was dictated by very strict rules and customs, including that of binding the feet of young girls before they entered puberty. After the binding, girls were restricted to the women's upstairs parlor, where they would remain, primarily, throughout their lives. Only as young children in their "milk years" were they allowed to see the outside world and explore nature. Their lives were devoted to creating embroidered clothing and quilts and building their wardrobes and those of their future husbands to create a dowry. Women were considered "worthless branches" in the family tree, and their sole purpose was to produce sons for their husbands. Since feeding a family was a major challenge, a female mouth to feed was simply a liability.

Lily and Snow Flower maintain an intimately close relationship throughout their young adulthood, getting together as often as possible for different festivals and celebrations, sleeping together, reciting poetry, touching and soothing one another and discussing the trials and tribulations of marriage and parenthood. Snow Flower is portrayed to Lily as someone who comes from a high-ranking family; however, it is not until much later that Lily learns that Snow Flower's family is in a state of ruin. Lily holds resentment toward Snow Flower and toward her own mother for keeping this truth from her for so long.

By chance, the women are together at a time when the approach of rebel forces made it necessary to spend three months in the harsh, steep mountains above their villages. They return safely, but Snow Flower's favorite son does not survive the harsh conditions. Snow Flower becomes increasingly despondent over the physical abuse dealt by her husband and over losing her babies. Lily, who has risen in social status to a high position, impatiently encourages Snow Flower to practice the traditions of obeying and finding pleasure in serving the family, in essence, to snap out of her depression. Lily wants the best for Snow Flower, but does not know how to fix her dismal situation and is frustrated with Snow Flower's feelings of hopelessness. When Snow Flower turns to other friends for their understanding and love, Lily denounces her and ends their relationship, even though it causes her great pain and sorrow.

Lily finally realizes that she misunderstood Snow Flower's commitment to the other friends and had never stopped loving Lily as her "old same," but was simply very ill and needed support and love, just as Lily had needed her love when they were children. Lily commences to care for Snow flower night and day until she passes away, and she recounts their relationship through this novel.

More summaries and resources for teaching or studying Snow Flower and the Secret Fan.