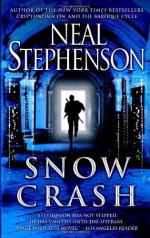 Neal Stephenson
This Study Guide consists of approximately 81 pages of chapter summaries, quotes, character analysis, themes, and more - everything you need to sharpen your knowledge of Snow Crash.

All aspects of existence in the Snow Crash universe have been privatized. This includes the breakdown of the military to private forces and security organizations, the competition between highway companies, and the shrinking of the United States government to the point where the average person does not know who the President of the United States is. The franchise concept has been distilled to an exact science, easily recognizable by the three-ring binder in the hands of a manager. Government regulation has been reduced so far that L. Bob Rife can easily establish a global monopoly on the fiber-optics market without resistance from world governments. The original structure of the United States has been sold off and sub-divided to the point that the land is made up of self-governing franchised city-states. Even highways have been privatized, and competing franchises resort to gang warfare.

Every demographic portrayed in...

More summaries and resources for teaching or studying Snow Crash.